What do Bitcoin Core, Bitcoin Classic and Bitcoin Unlimited propose?

Bitcoin, due to its open and collaborative essence, is characterized by its public debates. One of the most famous and constant is the size that Bitcoin blocks should have due to the growth in the rate of transactions that is taking place on the network. have you heard of Bitcoin Core? and of Bitcoin classic? Maybe from Bitcoin Unlimited? Discover which are the proposals with the most travel and support for the scalability of Bitcoin.

Core, Classic, Unlimited or the already abandoned XT, are some of the most famous proposals that the community is supporting to take Bitcoin to a new level according to the success and use it is having. These types of proposals involve major software updates, which is technically known as "hard fork". It implies that, once one of them is accepted by consensus, all nodes will apply it to operate on the same version of Bitcoin and blockchain.

There are many options and debates that have been derived from this issue ... some of them even ending in passionate "fights" that in a way would be more corresponding to 5-year-olds, but at the end of the day it was predictable ... it is a delicate subject that can shape the future of Bitcoin, so everyone tends to defend that their proposal is the best idea for greater efficiency.

One of the great things that Bitcoin has is just this, the debates. Although they can sometimes generate specific conflicts, they constantly add value and community. This is something that other closed and traditional systems not only do not understand but sometimes criticize, see as a defect or simply do not support due to the harsh reality that it means: a global community working for free and passionately on something. that removes them from the game. Surely you have seen a press release indicating the end of Bitcoin due to an open debate ... How many times has Bitcoin died?

As always, we will not go into which option is better than another or which project is better for the future, what we are going to talk about in this article is one comparison of bitcoin Core, Classic and Unlimited so that you understand all these options first hand, what they are and why not, you decide to create a node of some of them.

Proposals for the size of Bitcoin blocks

The purpose of Segregated Witness proposed by Pieter Wuille and that is already in tests in the testnet network is to add all the transaction signatures in the Merkle Tree of the component Coinbase of the transaction.

El merkle tree it is built by matching each TXID with other TXIDs and then making them jointly. If the TXID number is odd, the TXID that has no match would be sorted with a copy of itself.

How does Segwit help with the 1MB limit on blocks?
Segregated Witness removes the signature from the transactions and saves them in a separate data structure. Thanks to this procedure, the transaction size would be reduced and more transactions could be added in each block. Just on April 9, one of the blocks of the testnet had a size of 1.5MB.

For Gavin Andresen, Segregated Witness will not help to overcome the scalability problem in which the network would be immersed within a short period of time.

You can see the complete and original proposal here: BIP0141

And you, what do you think, will this proposal help Bitcoin? If you are looking for more information about Bitcoin Core, then we leave you its roadmap of implementations.

After proposals ranging from 8 to 20MB, some of the developers who participated in the implementation of Bitcoin XT started working on this new proposal and client in which the size of the blocks would be increased to 2MB after the continuous not that they were sent by several of the current developers of Core Bitcoin. 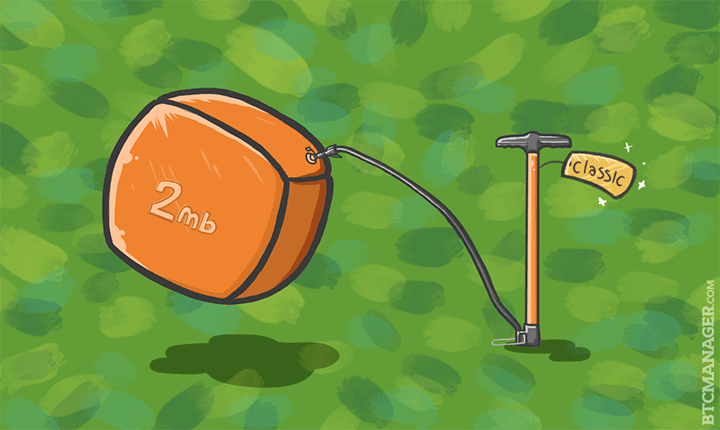 Proposal to increase to 2MB

Bitcoin Classic is also a Bitcoin implementation It presents a set of proposals stating that Bitcoin must follow its path for what it was designed to be, a decentralized payment network from person to person and not just a form of storage of value.

In their view, the block size limit is not helping the scalability of the network and that is why they also launch a proposal by which the blocks would increase from 1 to 2MB. In the event that 75% of the total mining power were in favor of this option, the hard fork in the network and the valid chain where the miners would be contributing their power would be the one that follows for blocks with a 2MB blocksize.

This project divides its proposals and roadmap into 3 phases that we summarize below.

Implement 109 BIP y increase the size of blocks from 1MB to 2MB as we mentioned previously. Saying BIP it proposes that the increase would occur as long as 75% of the last 1000 blocks are in favor of that change. In this case 750 out of 1000 blocks should be from miners who support Bitcoin Classic.

Reduce the effect of propagation times of orphan blocks.

Optimization and improvements for the operation of nodes. with limited bandwidth.

Parallel validation of blocks and faster. By not revalidating the transactions when they are included in a block if they have already been validated when entering the mempool of a node.

This phase would only take place as long as miners and companies satisfactorily confirm phase 2. If everything happened satisfactorily they would start working on a dynamic block size based on BitPay's Stephen Pair proposal that we already discussed in our dynamic blocks article.

As well a simplified version of the Core Segregated Witness would be added.

What is Bitcoin Unlimited?

After the intense debate of Bitcoin Core vs Bitcoin Classic, there is still more!

In this case we are talking about the first implementation that proposed increasing the size of blocks to facilitate Bitcoin's scalability. As its name suggests there would be no limit set by code and would allow users to manually define the limit of their own nodes. Deriving in a limit that emerges naturally.

Unlimited already crazy?
Do not ? Bitcoin Unlimited includes up to 2 default settings to limit the size of the blocks. The creation of the blocks is defined in 1MB and the miners would not create superior blocks until they decided.

It is also very important to note that some of these more or less exotic names, representing strong Bitcoin updates, not only carry implicit changes around the size of the block. They usually imply more changes than, sometimes, it is their entirety that can lead to popular displeasure. Some of their proposals are very interesting and promising for a future package of proposals, under a new name and, why not, developers.

A few weeks ago we published an article where we talked about the option of dynamic blocks in Bitcoin, which developers had worked on them and how to understand the proposals that all of them had published in the forums or in Github beep mode (Bitcoin Improvement Proposal).

From Meni Rosenfeld a upalc o Bitpay. If you haven't read it yet, what are you waiting for?