Skip to content
> Bitcoin > What is a dynamic block?

What is a dynamic block?

It is March 2016 and there have been many months in which a key issue has been discussed in the community: the size of the network blocks should be. Bitcoin due to the growth in the pace of transactions that is taking place on it.

Core? Classic? Unlimited?
Surely you have heard of many clients (wallets) that present some options or others and the truth is that they have led to intense debates in the main communication channels of the users of bitcoin even reaching direct accusations between all parties. It is clear that we are dealing with a sensitive issue and each one tends to defend that their proposal is the best.

From Bit2Me we are not going to enter which option is better than another or which project is more optimal for the future. The idea is that after reading this article you have learned something new related to Bitcoin and what better than to explain the proposals that have come up to date about a possible dynamic block size. None of the aforementioned proposals has presented it as a starting point could be an interesting option that is beginning to be discussed after the "Bitcoin Improvement Proposal”Under the title of“Adaptive blocksize”Which has been published by kleetusby Bitpay.

HIGHLIGHT: this is not a new idea and there have been several members of the community like Meni Rosenfeld o upalc who have already dealt with the subject before.

In this post we will focus on the BIP (Bitcoin Improvement Proposal). of Upal and Bitpay trying to explain in a clearer way and in Spanish both proposals so that you do not lose detail and the idea that they intend to transmit for dynamic blocks that help avoid a stagnation in the scalability of Bitcoin is clear to you.

In this proposal, Upal proposes to replace the maximum fixed size with a dynamically controlled maximum block size and that it can increase or decrease with the change in difficulty depending on various factors of the network. These are his two proposals:

With the increase in adoption, the volume of transactions on the Bitcoin network is destined to grow progressively. For upal, not swapping the 1 megabyte limit for a flexible one would hamper Bitcoin adoption and growth.

First proposal: depending only on the previous block

SINO
SO the same MaxBlockSize will remain

Therefore, this option would not only increase the size of the blocks, but could also be reduced depending on the needs of the moment.

Second proposal: depending on the calculation from the previous block and the transaction fees received by the miners

This option provides a stable reward for miners by not increasing the maximum size of the blocks until the transaction fees are not increasing and creating a strong pressure on the cost per transaction. In addition, and despite being dynamic blocks, it is difficult to try to "cheat" it because the increase or decrease would occur in the same proportion as the average increase or decrease in the block size.

BIP published on March 22 by Kleetus from Bitpay proposing a limit also dynamic based on the average block size of the last 12960 blocks (approx 3 months of transactions) multiplied by 2 and calculated when a block is already connected to the blockchain, increasing or decreasing following the actual use of the network. 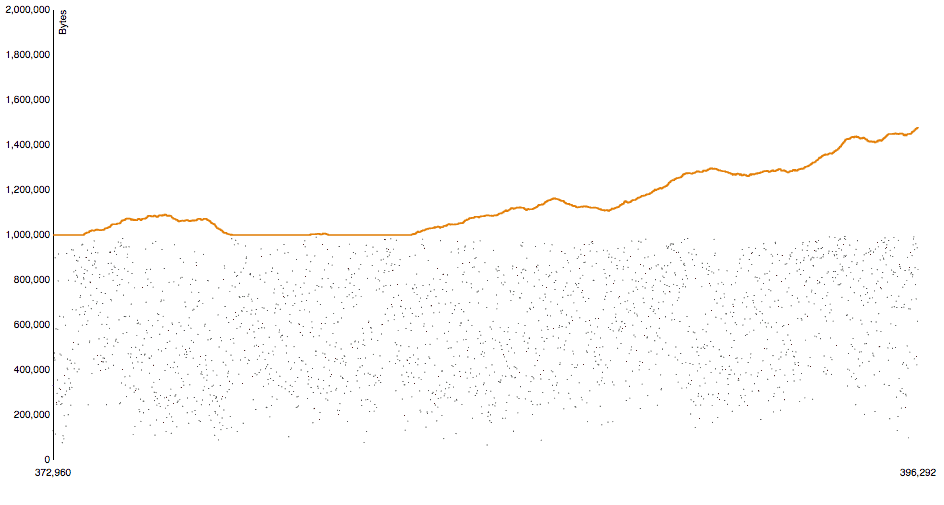 Formula proposed in the BIP to calculate the size of the blocks every 3 months approximately:

If the median is less than 0.5MB, the maximum block size will be 1MB until the next calculation. But 2 for the median will be the final increase in the maximum size per block.

According to Bitpay, all of these metrics worked well to react as quickly as possible to market forces. market without being excessively volatile. Except at the extremities, other options for a period look back would work just as well. With his proposal, miners would have more options when it comes to limiting the size of the blocks created. Some will want larger blocks to minimize transaction confirmation times, and others will prefer to remain conservative.

We are talking about two proposals that undoubtedly enrich the Bitcoin ecosystem. With this introduction to both, you can no longer say that you are not up to date! ? From here, it is time to view and analyze all the tests that are carried out as a test to verify the viability of all the proposals around the dynamic blocks.