Skip to content
> Cryptocurrencies / DeFi > What is Theta Network and its cryptocurrency THETA?

What is Theta Network and its cryptocurrency THETA?

Theta Network (THETA) is a decentralized network project focused on peer-to-peer (P2P) video streaming and using a blockchain with capabilities smart contracts advanced to create an incentive economy with which to provide services on this streaming network.

EIn a way, we can see Theta Network as a platform like Twitch or YouTube where content creators can connect to different dApps to stream the content they want. The content can be from videos, movies, gameplays, to online radio. Anything that can be streamed can be adapted to Theta Network and take advantage of its global network of nodes.

SHOP THETA NETWORK
Do you want to start enjoying the world of cryptocurrencies, ? Then it is time to open your Bit2Me user account. It is very easy to do and, in addition, following this link You will get € 5 totally free on your first purchase at Bit2Me.

Theta Network: what it is and advantages

In a way, we can see Theta Network as a platform like Twitch or YouTube, where content creators can connect to different dApps to stream the content they want. The content can be from videos, movies, gameplays, to online radio. Anything that can be streamed can be adapted to Theta Network and take advantage of its global network of nodes.

The main advantage of this model is that it is much cheaper to stream through Theta Network than using other centralized infrastructures. Not only that, the incentive and storage payment system is totally decentralized, so the money you can generate from it reaches your wallet directly, and content censorship is avoided. At the same time, Theta Network offers tools to integrate its services into dApps and centralized applications, with the ability to protect content with DRM if needed, and even integrate advertising to generate revenue.

Finally, streaming content can vary in quality according to needs. From resolutions ranging from 720p (HD), 1080p (Full HD), through 2K, 4K and VR / AR in real time.  This makes Theta Network a unique network in terms of streaming capabilities and all this thanks to its P2P-type CDN transmission and storage protocol. All this maintained by the tokenomics of its blockchain network. 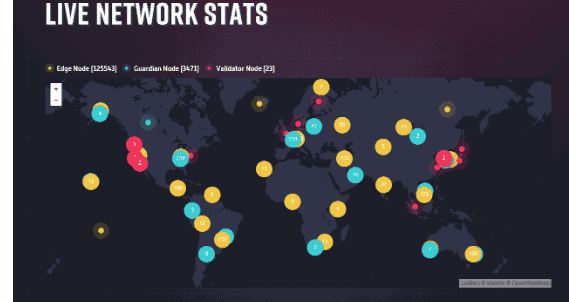 The project began its construction thanks to the work of Mitch Liu and Jieyi Long, who began their work in 2017, with the creation of Theta Labs. Liu is a long-known figure in the world of video games, audiovisual content and virtual reality, as well as being the co-founder of video advertising firm Tapjoy, Gameview Studios, and Midverse.  For his part, Long has experience in design automation, video games, virtual reality and large-scale distributed systems.

While the team behind Theta Labs was small in 2017, all of this began to change rapidly as they added high-level corporate supporters. Investment funds such as Sony Innovation Fund, Sierra Ventures or Bertelsann Digital Media Investments decided to support the development of the idea. At the same time, companies like Samsung, CAA, Gumi and Google itself began to support the project.

Thanks to all this effort, Theta Labs launched Mainnet 1.0, on January 18, 2018, this after a trial period in which the functionality and stability of the network was demonstrated. However, Mainnet 1.0 was not a fully decentralized network, something Theta Labs itself had reported since its inception. The technical challenge they had to face for a fully decentralized P2P network for streaming was much greater, and therefore Mainnet 1.0 was just a first step on that path.

Currently, the network is in its Mainnet 3.0 and Mainnet 4.0 or Metachain, as it is known within the project, is being developed. The Mainnet 4.0 release will take place on October 1, 2022 for its testnet, and on December 1, 2022 for its mainnet release. Metachain aims to keep all the decentralized streaming functionality of Theta Network, adding new unique functionalities intended to integrate DeFi, NFTs and Metaverses in your equation. In this way, Theta Network can be used to generate dApps that can be integrated into these spaces and magnify their reach.

How does Theta Network work?

The functioning of Theta Network depends on two mechanisms: the blockchain mechanism, in charge of maintaining the consensus of the network and all its tokenomics, and the content distribution mechanism, which is in charge of carrying out P2P streaming, load balancing and manage data storage. Both mechanisms have very different functions, however, they are closely related to each other.

Theta Network is a high-speed blockchain that works through a Proof of Stake (PoS) mechanism. The intention of choosing this mechanism is to provide a fast, energy efficient and secure network. This is vital because it frees up computational power that can be used for other vital activities within the network. This is the scheme that is currently in operation in Theta Network, with its Mainnet 3.0.

However, Theta Network will also launch Mainnet 4.0, a sharding system. Thanks to this system, the scalability and cross-chain capacity of Theta will increase considerably. The sharding system is very similar to the one developed in Cosmos, allowing subchains to send messages to each other and maintain a consensus throughout the network. Likewise, each subchain can have its own services and distribution mechanisms, adjusted to its needs.

keys to this system

The intentions of this system are clear:

The blockchain mechanism is controlled by the validator nodes, which are in charge of producing the blocks. These nodes can only be installed in computing instances with high connection speed and computing power, due to the speed with which the Theta network operates. In fact, validators are currently capped at 31 maximum active validators, with a maximum theoretical limit of 100 validators. To create a validation node it must be placed in staking a total of 200 thousand THETA (approx. $704.000 USD) per node. Because of this, these instances are usually run by companies or groups that can raise such a sum and thus earn staking rewards for their work.

The second type of nodes within the blockchain mechanism are the guardian nodes, whose function is to detect any misuse of the network. Although the validators produce the blocks, the guardians are necessary for their full acceptance by the network. If a block generated by the validators is considered invalid by the gatekeepers, either due to some computational error or manipulation of the block by a malicious validator, then the block will be rejected and the validator will be warned with the loss of the reward and even with removal from the network.

This model of Guardians and Validators serves to maintain the decentralization of the network, while maintaining a high-speed operating structure. Guardian nodes are also staking nodes and their installation needs at least 1.000 THETA (approx. $3520 USD), for their work and staking within the network, these nodes are also eligible for staking rewards.

Finally we have the Edge nodes, which are the vast majority of nodes in the network. These nodes are the ones that create the P2P network that is responsible for distributing and storing the streaming data that users need. For their work, Edge nodes receive TFUEL tokens, which can then be exchanged for THETA tokens or other security tokens as their holders wish. To start these nodes you must have at least 10.000 TFUEL for staking, and the rewards you will receive will be in accordance with the use of resources that your nodes have.

The Theta Network's P2P distribution mechanism is in charge of ensuring that both content creators, users and decentralized points of the network carry out their work during the transmission of content. To do this, Theta Network subdivides its P2P network, each one with a specific function and all this work is carried out by the Edge nodes.

The purpose of Edge nodes is simple: to serve as decentralized CDNs (Content Delivery Networks). CDNs are an essential part of the infrastructure of Internet current. For example, applications such as YouTube or Twitter will not provide us with the user experience that they offer, without the existence of such infrastructures. On the other hand, CDNs are also a nightmare, because being centralized, their failure puts these services out of service globally. A good example of this has been the fall of CDNs such as Cloudflare or Fastly, which ended up affecting users all over the world.

However, Theta Network cleverly solves this. Making use of P2P DHT protocols, a decentralized CDN network has been created, one that is capable of maintaining its operation even with a 50% drop in it. All that CDN falls on the work of the Edge nodes, which have the following functions:

Taking into account the role that Edge nodes play in the distribution mechanism, it is understood how they generate value and why they are so important in the ecosystem. In fact, this is mainly the reason why Edge nodes have grown exponentially over the last two years, as their tokenomics benefit them for their work. 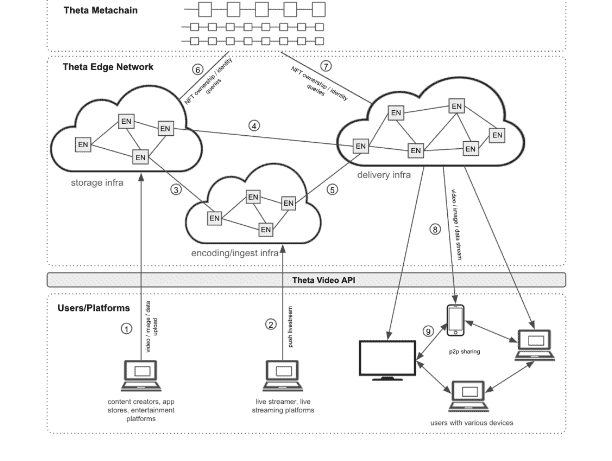 THETA token and TFUEL, the tokenomics of Theta Network

Theta Network has created a tokenomics that relies on two tokens: THETA and TFUEL. The first of them is him token native to the platform and is used for the payment of commissions, staking rewards, deployment and interaction of dApps and smart contracts, assembly of validating and guardian nodes, in addition to being the governance token of the project. If you want to transmit value using Theta Network, THETA token is the medium for it.

The existence of THETA tokens is limited to one billion tokens, which are already distributed on the network. This means that any affectation in the value of the token completely affects the valuation of market from Theta Network. In fact, at the time of writing, the THETA token is worth $3,37, which means a capitalization of $3,37 billion for Theta Network.

Real Use Cases of Theta Network

Theta Network has demonstrated real and concrete use of its network by providing access to the services it promises. One of the most important implementations of Theta is in the hands of Samsung, which has used the Theta network to distribute quality content on its smartphones in the Asian market. This has enabled the company to reach over 100 million users who can access exclusive content served within Theta Network. In addition to that effort, Samsung has also participated in the creation of exclusive NFTs using the capabilities of Theta Network.

Sony, another big company within Theta Network, has been looking into the possibility of integrating the network's services with its PlayStation Network, in order to offer gamers a highly integrated content streaming option on the platform. An effort involving Sony, Littlstar and Theta.tv.

Theta.tv on the other hand, is one of the most used applications within Theta Network. With multiple channels of the highest quality and production, channels dedicated to different hobbies and technologies, and the ability to stream very easily, without giving up the ability to generate income in Theta Network's tokenomics, Theta.tv is a strong demonstration of the capacity of Theta Network as a decentralized content distribution network. 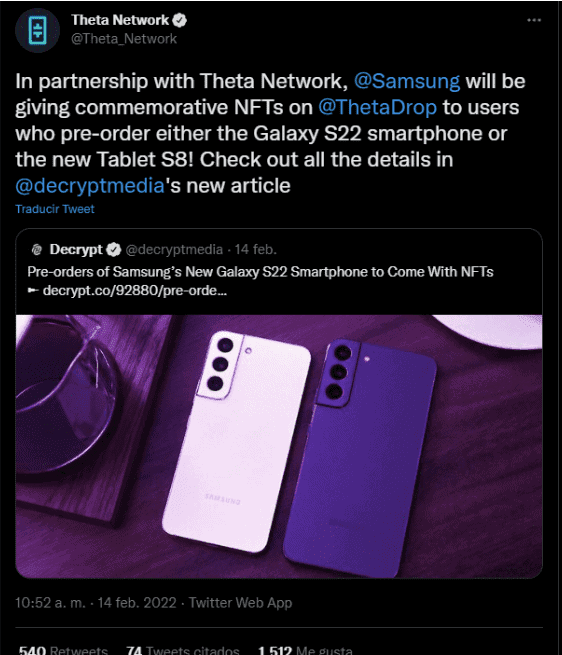 BUY EWT ON BIT2ME
Do you want to start enjoying the world of cryptocurrencies? Then it is time to open your Bit2Me user account. It is very easy to do and, in addition, following this link You will get € 5 totally free on your first purchase at Bit2Me.

Go to the Discord channel