Skip to content
> Cryptocurrencies / DeFi > What is token 0x (ZRX)?

El token 0x is part of the 0x protocol and whose function is to create an exchange currency that guarantees interoperability between decentralized applications (DApps) that incorporate exchange (DEX) functionalities.

What is the 0x token?

EThis is a token ERC20 created in order to allow easy use of the protocol 0x. That is, 0x as a project is made up of two parts, the 0x protocol and its 0x token (ZRX). It is through both structures that a powerful way of creating decentralized exchanges is achieved.

Simply put, 0x is a token used within the 0x protocol platform. With this way of working, 0x prevents its protocol from being maliciously exploited. It also serves to grant economic incentives to those who are part of it.

0x was created with the purpose of promoting interoperability between decentralized applications (DApps) that incorporate exchange functionalities (DEX). To achieve this, 0x allows operations to be executed by a system of smart contracts de Ethereum. These smarts contracts are public access, free to use and can be used by any DApp.

The result of this is that DApps can access public liquidity funds or create their own liquidity pool and charge transaction fees on the resulting volume. This improves the economic capacity of said DApps, in addition to increasing their security.

The 0x project started when Will warren y Amir bandeali joined forces and co-founded 0x in October 2016. At the time both Warren and Bandeali envisioned a world where every asset could be represented as a token on the blockchain de Ethereum. From fiat currencies, stocks, gold, and digital game items, their nature didn't matter.

This strong tokenization required a reliable and secure exchange system. Seeing the opportunity before them, they decided to start creating 0x. With this new protocol, exchanges Decentralized (DEX) took a leap forward in its functionality. This is because 0x allowed them to exchange any Ethereum token over any decentralized exchange that will use this protocol.

This operating structure is thanks to the relayers. These relayers are built on top of 0x and house order books of blockchain and may charge fees for their services.

Since then, 0x has undergone changes to accommodate the growing needs of decentralized exchanges. On August 17, 2017, 0x ended its ICO with the sale of 24 billion tokens and a raise of $ 0 million. With these initial funds, the program grew internally and proved itself, the team realized that opening the application process to the public was the next big step. From then on, the evolution of XNUMXx has allowed it to position itself as one of the best options for handling DEX.

How does 0x work?

The operation of 0x is mostly done off-chain, that is, transactions are made outside of the Ethereum blockchain. The advantage behind this is that there is better control of the exchange process, fewer errors and it is much faster and without costs. The following image shows roughly how this process works.

Knowing this, we can deduce that: 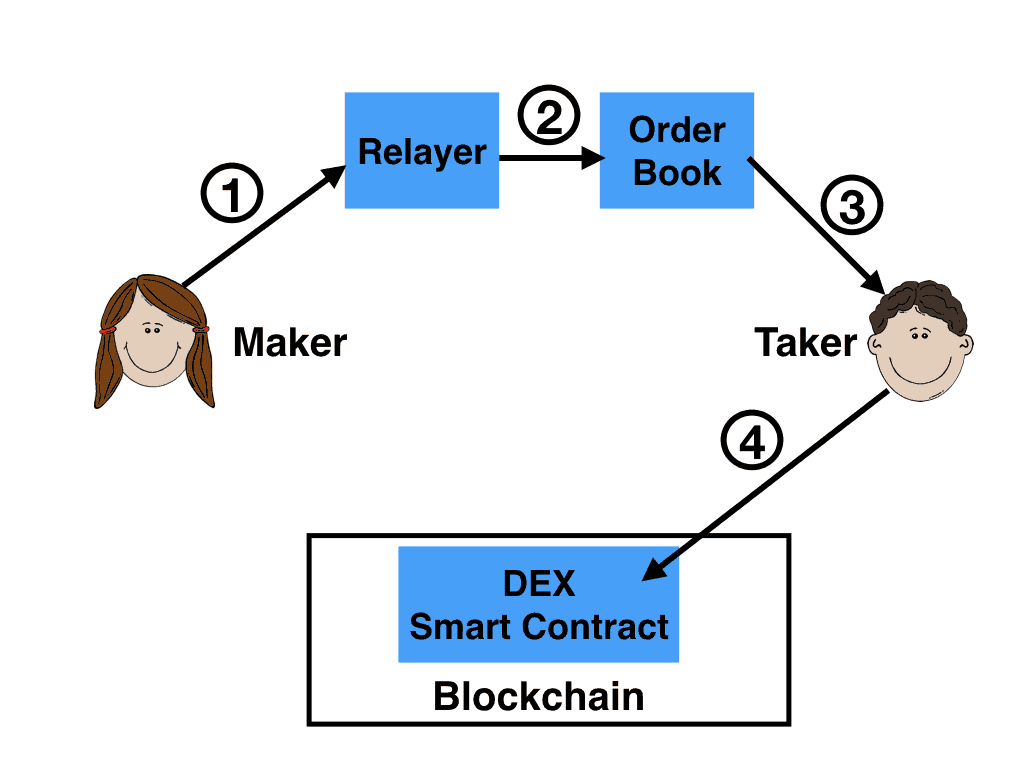 0x, a cryptocurrency with unique characteristics

The operation of 0x depends on a large communication structure and intertwined smart contracts. Thanks to this, developers can use and adapt their DApps to the technical needs to access 0x and its benefits. These technical characteristics include:

Better known as ExchangesThese are the ones who process the requests made by network clients. Their job is to be an intermediary between the creators of an exchange order and those who are interested in making the exchange. At the same time, relayers are the ones who keep the network's command book. With this the relayers have the task of maintaining all the operation of the network.

Relayers have two ways of operating within the network. The first one is through communication peer-to-peer (P2P). In this operating model, the owners of the tokens do not need the interaction of a third party to transmit the transactions to the blockchain. Instead they use the 0x smart contract, where each user can create their own order and advertise it the way they want.

In this way, when some other token owner wants to accept an order, they simply take the order and execute it using the 0x smart contract to finalize the exchange. All this without the need for any intermediary.

The second way of operating is through the order of transmission. This way is basically taking exchange orders, displaying them, and waiting for others to accept them. At this point, the relayers function as an intermediary showing the rest of the users what exchange orders exist in each of them. 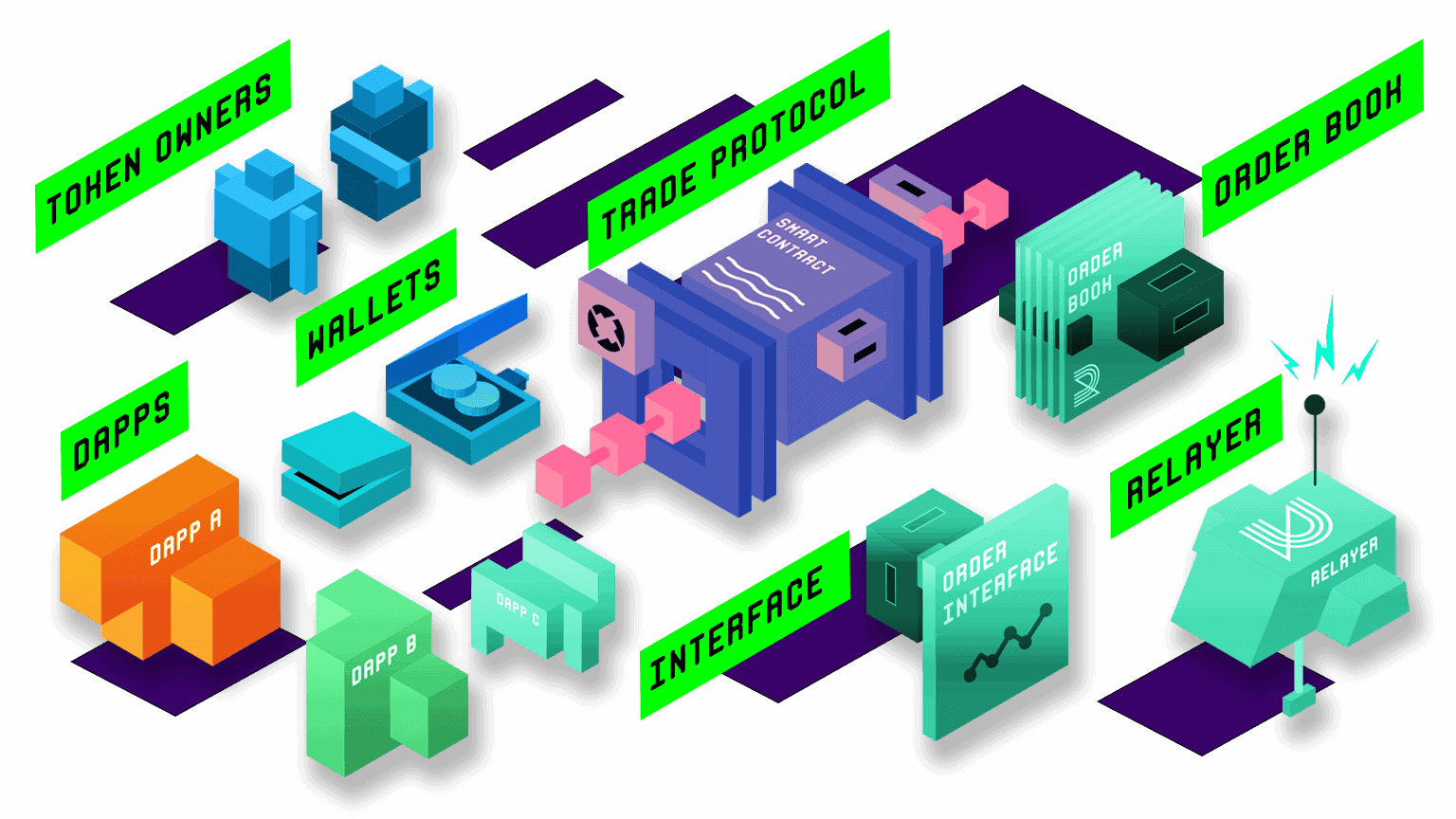 However, foreseeing the growth and needs of a world as changing as that of DEX, 0x can extend its functionalities thanks to extensions. To achieve this, 0x makes use of so-called extension contracts. These are smarts contracts that extend the way 0x orders can be completed.

For example, an extension contract at 0x can perform certain jobs on behalf of users. They can also be used to validate that users belong to a specific group. Extension contracts can even be written to join multiple extension projects. Decentralized Finance.

Given the flexibility and reliability of 0x, this project has been widely adopted by different DEXs. Among these projects we can highlight:

In each of these projects, 0x helps expand the capabilities of their platforms, allowing them to execute off-chain interactions to make exchanges that might not otherwise be possible. A demonstration of the strength and flexibility of 0x, to respond to the special needs of decentralized exchanges.

What advantages does 0x offer?

Go to the 0x github

Go to the official 0x thread on Bitcointalk