Skip to content
> Bitcoin > What is a blue chip? The case of Bitcoin in the crypto world

What is a blue chip? The case of Bitcoin in the crypto world

Today we discover that it is a blue chip and the most outstanding examples in the world cripto. Since the arrival of Bitcoin (BTC) to the world, the address of the cryptocurrency is very clear: to become money, a type of money that, thanks to its limited existence, would appreciate considerably, becoming digital gold and thus a form of refuge value for those interested in the new cryptocurrency.

DIn fact, what could be the greatest confirmation of this reality can be seen in the evolution of the value of BTC throughout its history. Going from being worth absolutely nothing to exceeding $60 USD makes it clear that Bitcoin, with all its volatility, offers its holders the possibility, not only to revalue their assets, but also to keep them at a time when inflation affects all economies. of the world.

Of course, there are many conflicting opinions on this point, but the data is there for all to see and the reality is incontrovertible: Bitcoin IS a safe haven. A type of refuge that is governed by its own rules, which has its particularities and must be understood according to them.

Now, you will surely ask yourself, what real reasons are there to think that Bitcoin is a "blue chip" and a good refuge in the markets? Well, let's examine all this a bit to understand why defending Bitcoin as a refuge value is a correct position.

When we talk about a "blue chip" or "blue chip" we refer to a type of casino chip that represents a maximum value, a term that has been transferred to the traditional financial world to identify securities or actions that are a "safe bet" in times of financial crisis. Basically, a "blue chip" refers to any action, company or market that even in the harshest economic conditions it maintains a certain stability and even growth. They are, to put it more simply, a “financial gem”.

A good example of a "blue chip" can be found in energy companies. These companies, even in times of low economic growth, disruptions in the oil and gas markets and even in severe recessions, tend to maintain a significant level of economic relevance, a fairly stable value of their shares and may even experience a slight growth in their value. . Take for example a fund and a company in this sector:

Energy Select Sector SPDR Fund, is a fund dedicated to the energy market that seeks to provide investment results that, before expenses, correspond generally to the evolution of prices and returns of the Energy Select Sector Index. This Index attempts to provide an effective representation of the energy sector following the S&P 500 and seeks to provide accurate exposure to companies in the oil, gas and consumable fuels sectors, as well as energy equipment and services. The fund has been operating since 1998, going through such critical moments with the dotcom crash, the 2008 crisis, the Covid-19 pandemic and now the different events that drive global inflation.

Despite all this, the fund's return has been more than 224% and in its most critical moments it has never been below its minimum value, recovering its capitalization in periods of less than a year. This is a clear example of a blue chip and a good space to invest knowing that the world's energy needs are continuously growing and that, therefore, the value of the shares of this fund will follow the same trend.

What was seen in the previous case is repeated in our next example with the company Energy Recovery, listed in NASDAQ. This company is focused on manufacturing energy recovery equipment for the oil and gas, chemical, and water industries around the world. This company has been in constant growth, even in times when the global economy has not been at its best. 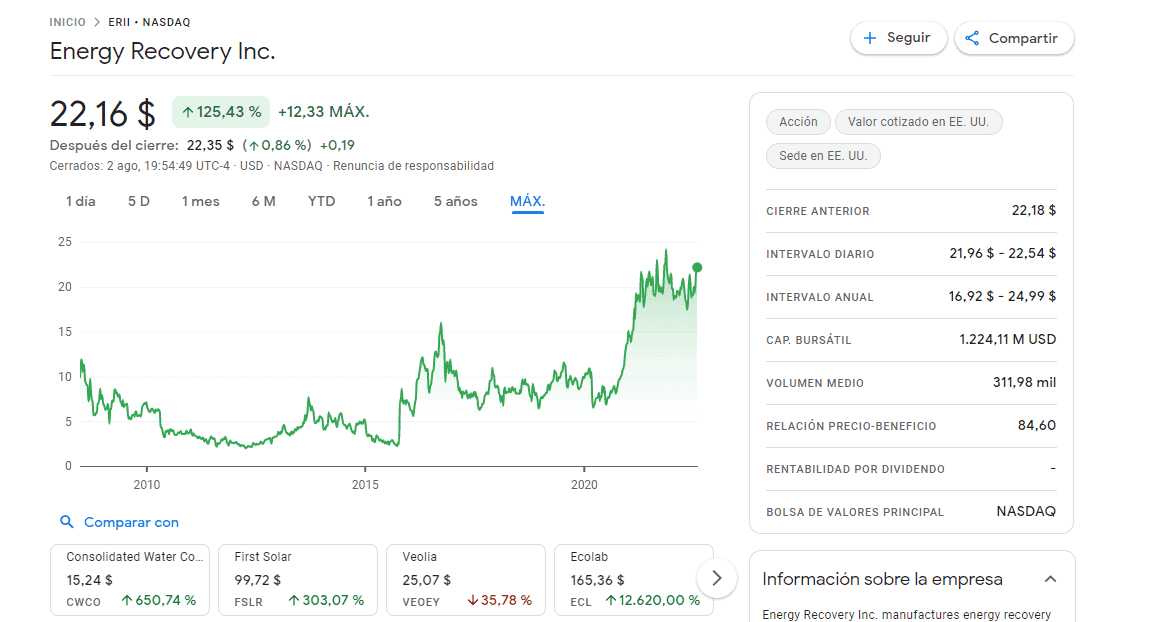 Blue chip in the crypto world?

Of course, these examples are very clear and belong to traditional finance, so we are left with the question: Is this repeated in the crypto world? Observing the close relationship and behavior of the traditional and crypto financial world, it is valid to say yes and, in fact, Bitcoin is the largest detectable blue chip in the crypto world. Let's see a graph of the market and valuation of Bitcoin to observe more easily: 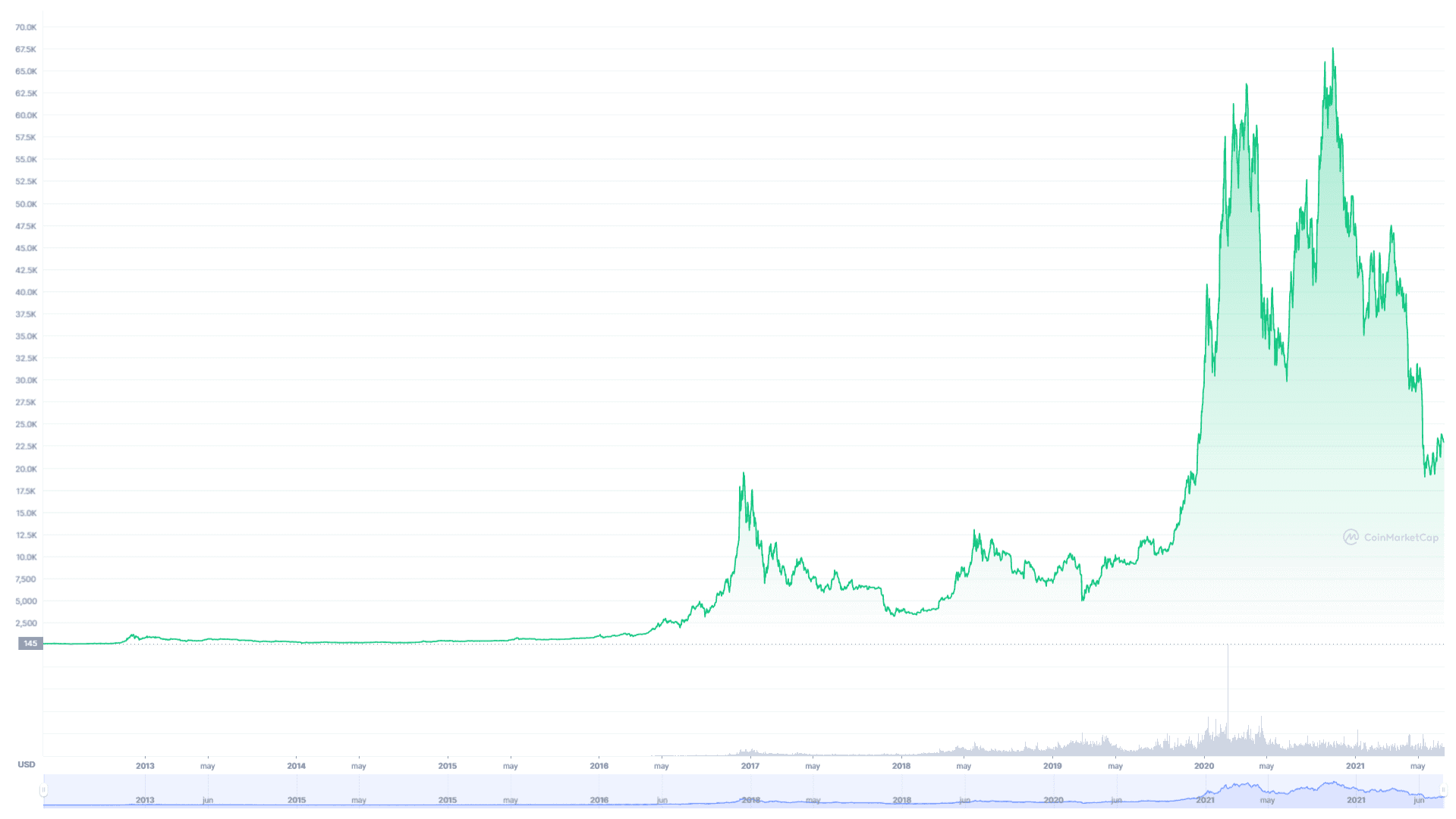 The chart comes from CoinMarketCap, and considering that the oldest market value tracked on the chart is from July 5, 2013 (BTC at $65,53), just look at how BTC's value has evolved since then to our days. The graph does not lie, the continued revaluation of BTC is such that it has never been in the red with respect to its oldest value tracked by CoinMarketCap, let alone if we talk about values ​​prior to that.

But there is a small problem: many market analysts believe that Bitcoin, along with the rest of cryptocurrencies, , they are not a blue chip, because their “high volatility” prevents them from being one. However, they forget that crypto is not traditional finance: we are not talking about companies or shares, we are talking about a technology that seeks to create a decentralized alternative to money, which has the ability to create new forms of digital interaction and new markets. . So it is clear that the traditional rules and measurements cannot be applied 100% in the crypto world, as we can see in the graph above.

Are blue chips safe in a bear market?

Now, that a cryptocurrency is considered a "blue chip" does not mean that it cannot be strongly affected in a bear market. Bear markets can seriously affect the value of a cryptocurrency and again BTC is an example of such a fact. After hitting that high of $68.789,63 USD in November 2021, BTC is now (Aug 2022) in the $22.000 USD range, a far cry from those highs.

The story is similar in most of the big cryptocurrencies, all of them affected by the general bear market, which is not only affecting the crypto world, but also the traditional markets and, in fact, is slowly beginning to affect the majority. of major world currencies (the USD and the Euro).

That said, it is clear that no blue chip (crypto or traditional) is 100% safe in a bear market. You cannot be sure that a traditional or crypto stock will not go down, that your investment will not be affected in a certain way and that is an integral part of the risks that must be faced in an investment of this type. In the end, that idea of ​​“low level of risk” is just a more subtle way of saying: “it is likely to explode, but we will work so that it does not happen”. And in the “we will work” part is where the difference lies, in knowing if a company or cryptocurrency is more or less reliable.

Let's see it with an example. We are facing a bear market and we are looking at two companies. We see that its prices begin to fall slightly, but we see that company A does not take actions to diversify its market, develop new products or reduce its expenses and clean up its accounts. In contrast, company B not only restructures to adapt to bad times, but seeks to develop products in new markets with useful options and continues to develop its activities seeking not only to keep pace, but to grow in the midst of adversity.

Now ask yourself, which one has the best chance of holding its value? Which is safer in a bear market situation? It is clear that company B takes the prize and the reason is clear, because staying in evolution and movement is important to overcome bear markets, and the same is true in cryptocurrencies.

Projects like Bitcoin and Ethereum they have always kept innovating and developing even in times as tough as the crypto winter of 2018, and even today. The fall in their value as coins does not stop their teams in the evolution of their technologies, and that creates a strong environment of "regain what was lost and overcome it". The cycle of falling and rising has been maintained, is maintained and will be maintained, as long as the projects have that same spirit and that is where the "blue chips", whether traditional or crypto, shine and make themselves seen as more or less secure in times as tough as a bear market.

In the end, choosing the "100% safe" option is impossible, but good research and monitoring of where we make investments, how the market evolves and realistic future prospects help us to be able to put aside bad options and go for it. the safest. 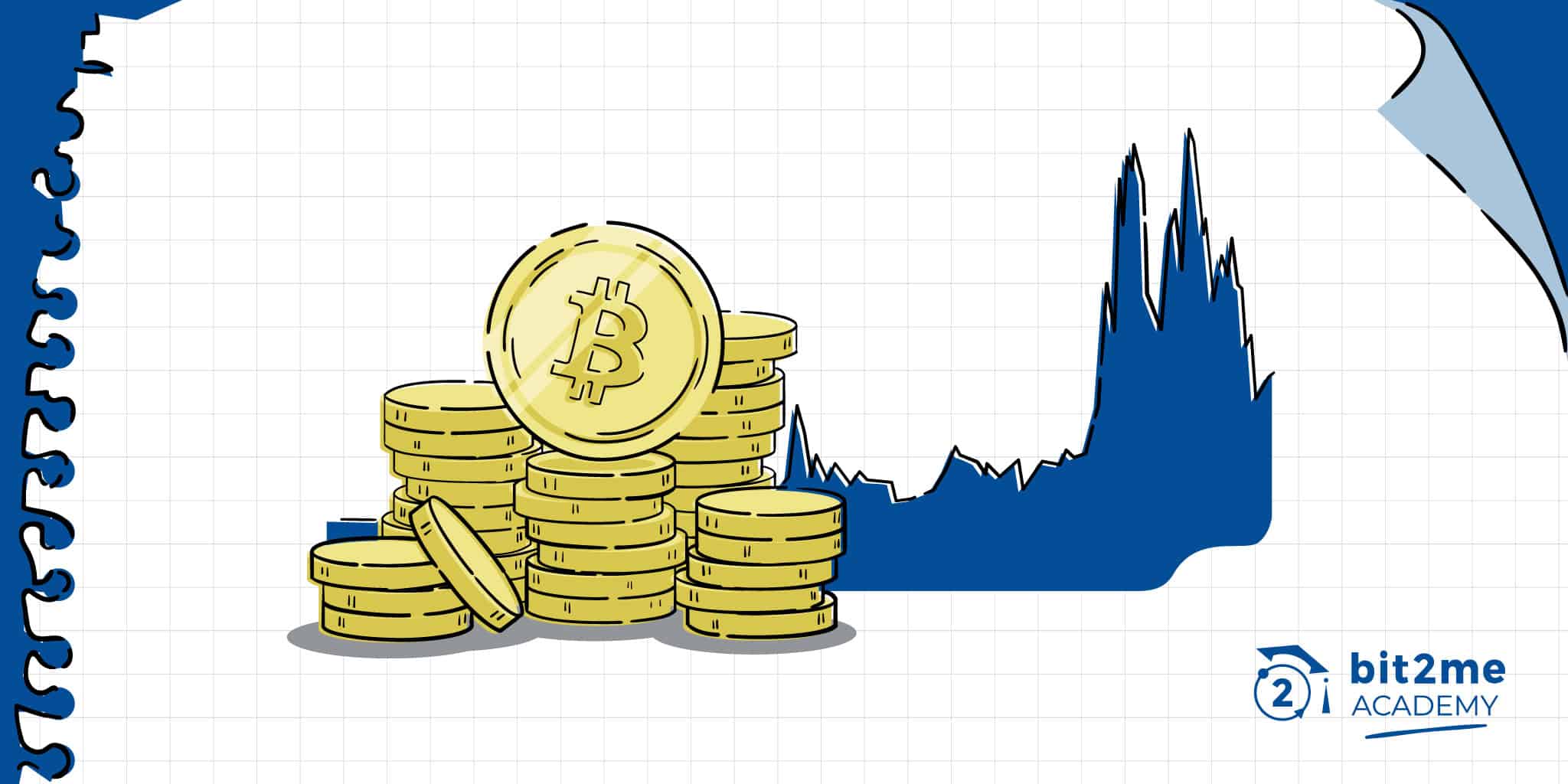 What are the top 3 cryptocurrencies?

Now, in the crypto universe there are hundreds of projects, each and every one of them trying to conquer the world. However, the reality is that the competition is very tough and, while many of these projects are promising, only a few have the potential to survive for a long period of time.

Thus, we can mention that among the Top 3 of large cryptocurrencies, which we can consider as Blue Chips, we have:

Although there are other interesting projects (such as Cosmos, Solana and Polkadot) there are elements in them that distance them from this Top 3. For example, Cosmos is still a technology under construction with many unfulfilled promises (more than Cardano and Ethereum combined).

Solana for her part, it is still a project in beta state and whose stability leaves in doubt if it is a plausible option to sustain a decentralized world for production. Polkadot, on the other hand, is in a situation where several of its ideas still need to be matured and opened up (parachains are still limited in both number and options).

That said, the crypto world is constantly changing, that is one of its main advantages and one of the reasons why this technology always causes a stir and draws attention around the world.