What is a DAO?

A DAO or Decentralized Autonomous Organization, refers to a revolutionary way of organizing and running organizations, making use of the smart contracts and technology blockchain to provide transparency, immutability, autonomy and security to them.

DAOs are not linked to any particular regulation or law due to the decentralized nature where the smart contract is executed and which is coordinated by the organization, the blockchain (blockchain).

Similarly, these smart contracts can be as simple or complex as you have decided to program. But they will be transparent and immutable the moment they are published on the blockchain. This will make it possible for everyone to review its operation and the rules that have been programmed within it, being sure that they cannot be modified in the future.

That is why heDAOs represent a powerful technological innovation. One that seeks to redefine the way in which different parties cooperate. This thanks to the fact that they allow the creation of autonomous, self-managed, transparent and more efficient organizations. 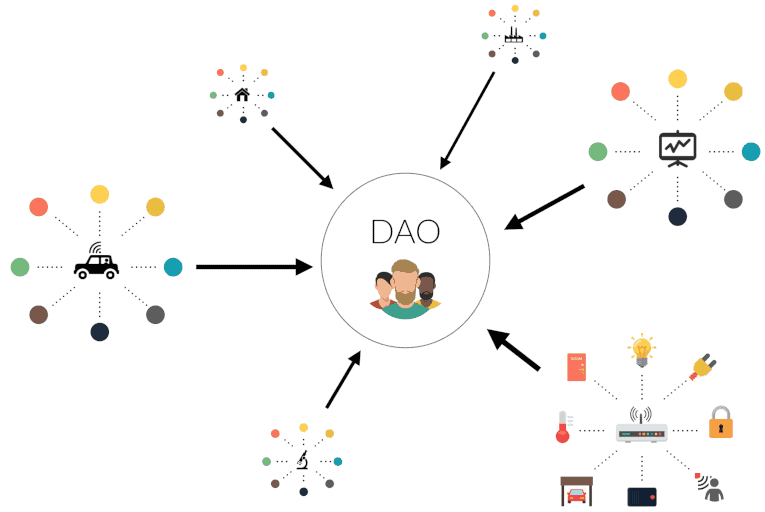 How does a DAO work?

DAOs depend on a series of mechanisms that guarantee their operation at all times. The first of these mechanisms is related to the ability to program actions and make them run according to certain parameters. With this, the DAO gains the ability to execute actions autonomously. Seen in a simpler way, this programming would become the set of rules that governs the DAO and the most usual way of programming said actions is through the smart contracts.

The second mechanism is a consensus protocol. Its function is ensure that decisions are made within the DAO are taken by the consensus of its parts. No external factor to the network and those who participate directly in it can alter or cause them to make decisions.

Next, the DAO have a third mechanism that depends on the issuance of a token or medium of exchange. The purpose of this mechanism is to guarantee a means that financially supports the DAO. In addition to allowing users to gain voting power and at the same time be a mechanism for exchange and economic reward.

Finally, they have a fourth mechanism whose purpose is to record everything that happens in the DAO. This task falls to the blockchain, where all the information is stored to be accessed publicly and guarantee its security. The union of these four elements is what allows the operation of a DAO at all times.

What is a DAO? By Franco Amati - Official FinHub

Basic example of a DAO

Well, using a smart contract all the neighbors could deposit the funds in the form of ethers or even some stablecoin based fiat. These funds would not be in the hands of one person, or two, but would be in the hands of everyone and nobody at the same time. The smart contract would have them blocked waiting for democratic decision-making, being transparently visible but without anyone treacherously using them as they wish.

For each new expense (repair or improvement, for example) a request would be generated, later associating the different estimates that suppliers send. After that, the residents could decide during a democratically determined period the budget that interests them, unlocking the funds only to the budget with the highest vote.

In this way, not only budgets for expenses, but also items for improvements, festivities and even the management and distribution of benefits of the leisure areas of common areas could be managed in a democratic, transparent and immutable way with rules known to all.

For example, imagine an autonomous car, bought by 10 people scattered around the world, who acts as a taxi, unlocking a payment and distributing the benefits to each partner, directly and without banks.

Or beyond Can you imagine a country managed by a DAO?. The candidate politicians would spend 4 years preparing the smart contract, so that later society decides that the smart contract wants it to govern them.

As you can see the use cases can be many, and the limitations are yet to be discovered. Like all innovation, only creativity will tell where this new tool that technology brings with it is capable of taking us. Blockchain.

A common mistake is to think that DAOs were born with Ethereum. While is true that Ethereum It brought this concept to a large part of the public in the Blockchain sector, the birth of DAOs came much earlier.

This innovative concept was initially postulated by Werner dilger, a renowned German computer science teacher. It was Dilger who in 1997 developed his work "Autonomous decentralized organization of the smart home according to the principle of the immune system". In it, Dilger defined the bases of the DAO as a self-sustaining and autonomous system, a work undoubtedly ahead of its time. However at the time, his idea was impractical. The technical challenge of creating a DAO could not be overcome until the arrival of the blockchain.

It was then that the DAO concept came to light again. On September 7, 2013, Daniel Larimer, Founder of BitShares y Steem, would talk about them in the Let's Talk Bitcoin!

By then Daniel spoke of them as Decentralized Autonomous Companies (DAC), another common way to call DAOs.

It wasn't until 2015, when Vitalik Buterin It would relaunch the concept thanks to the launch of Ethereum, which allowed to create advanced transparent and immutable codes (full turing), something that greatly facilitated the creation of DAOs and interaction with them.

Now surely you will ask yourself: Are there any DAOs in reality? The answer is yes. Certainly a DAO is not just any organization and the complexity to build them is titanic. However, that has not been an impediment to their being a reality. At the beginning of the article we name some names like The dao en Ethereum, Dash DAO Governance y DigixDAO. These are just a few real examples of fully functional DAOs.

The case of Dash DAO Governance, is an example of using DAO for the evolution of a cryptocurrency. This DAO is intended enable Dash governance at all levels and involve those who have a masternode. In this way, decisions are democratized within Dash and the financing of the project is managed. For his part, DigixDAO is another governance DAO focused on controlling the growth and development of Digix and its entire ecosystem.

The most famous DAO, The DAO

Without a doubt one of the best known DAOs was the project The dao. This project created in 2016 by Simon Jentzsch y Christoph Jentzsch It was released with the goal of building the largest DAO ever known using the power of Ethereum. Not only is it best known for being the DAO with the most funding, but also for what would happen next.

The result of the efforts of its founders was a success and with The DAO they managed to reach the goal of $ 150 million USD in what would be the largest crowdfunding campaign ever known. But the dream was short-lived. A serious vulnerability was discovered shortly thereafter in the code supporting The DAO and a hacker managed to seize $ 50 million.

The event meant a catastrophe for The DAO and even led to Ethereum applying a hard fork which gave rise to Ethereum Classic. All of this shows that although powerful, DAOs can also be a source of potential risks, especially due to their programming and the difficulty of solving such problems quickly in environments that have been designed to be immutable.

Is the only limitation of a DAO given by the ability to program functions on a blockchain?

The only thing that can limit the development of a DAO as a fully autonomous entity is the programming capacity and power of a blockchain. Due to this, the potential of DAOs is unimaginable, something especially true when we consider that blockchain technology and its capabilities continue to improve over time.

Advantages and disadvantages of DAOs

Like all types of technology, a DAO can offer its participants different advantages and disadvantages. Something especially true because they depend on the programming or regulations of the DAO. However, at this point we can generalize some points that are worth knowing.

Just a few years after its creation, DAOs are, without a doubt, an incredible technological tool that could be part of any great future revolution to come. Surely this revolution ends up coming from people not conditioned by the current limitations of society, visionaries. Who knows, maybe that person is you.