An OP_CODE or Operation Code, is a primitive code or instruction that allows us to program operations within an blockchain and Bitcoin. In fact, thanks to the set of these codes is that we can create advanced programming structures or smart contracts which are then read and executed by the nodes of a blockchain network.

These codes indicate the operations or functions that must be performed and executed by the hardware or software. In the case of hardware, the shape of the OP_CODE will be defined according to the type of operations set architecture (ISA) of the computer. That is, according to the instructions that the device has for the interpretation and execution of the operation codes. In the case of software, OP_CODE are created with a type of ISA, or operations architecture, specially designed to be interpreted by the virtual machine or the byte interpreter.

Operation codes allow a computer program to issue an order to the computer and for it to interpret and execute it.

How does an OP_CODE work?

In order for machines, equipment and computers to be able to receive and execute a specific order, it is necessary to issue instructions in a language that they can understand. Therefore, these instructions are written in a programming language containing operation codes or is ultimately translated into a series of opcodes.

These codes are written in a language that we generally know, such as English, and are then translated by a compiler or translator program for machines to understand it in their binary language. That is, the mnemonic instructions written in our language for the interpretation of us humans, have their equivalent in binary language so that machines can easily interpret them. And thus be able to act on the instruction received and execute it correctly.

A good example of OP_CODE can be seen in the following image: 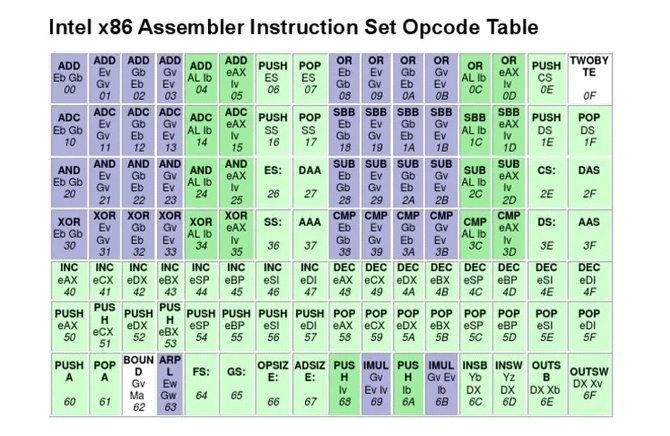 In it we can see some OP_CODES belonging to the instructions capable of executing a processor or CPU computer (specifically the x86 from Intel). As you can see it is somewhat cryptic to read and it can hardly be programmed using it (although some developments are made in this type of language due to its speed).

The situation in the world cripto, is not very different and Bitcoin For example, we can see something like this: 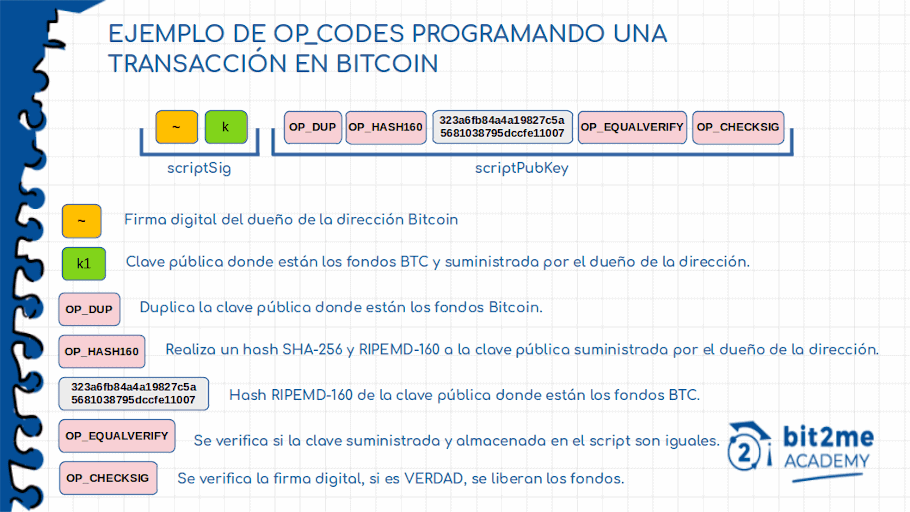 It's certainly just as cryptic, but this simple statement is equivalent to a transaction in Bitcoin. If you want to know more about it, you can read our article dedicated to Bitcoin script where we explain in depth what exactly these instructions do.

Types of opcodes in the Bitcoin script

The OP_CODES for Bitcoin Script they can be classified according to the function and indications that they are going to execute in the system. For example, these codes can be used to remove, add, move or rotate elements on the stack, analyze and perform arithmetic operations, validate or invalidate transactions, among many other functions.

Next we will present a list of the operation codes classified according to their type and functions. However it is important to note that this list is neither conclusive nor radical, since there are many opcodes in the Bitcoin script and only a few of them are mentioned here.

OP_0 = 0x00 y OP_FALSE = OP_0: both codes they push or add an element or an empty byte array to the stack. Neither one should be confused with NO_OP

OP_NOP = 0x61: This code does not execute any operation, but is used in cases where some space has to be filled within the program.

OP_ENDIF = 0x68: used to finish a block, since without this, the transactions would not be valid. A code OP_ENDIF without a code OP_IF above will also not be valid.

OP_RETURN = 0x6a- Used to mark a transaction exit as invalid.

OP_DROP = 0x75 y OP_DUP = 0x76: are used to delete an item from the top stack and to duplicar one item in the top stack, respectively.

OP_SIZE = 0x82- This code pushes the string length of the top element of the stack, without breaking it.

OP_2MUL = 0x8d y OP_1DIV = 0x8e: were used for multiply o divide by 2 the entry respectively, but both were disabled.

OP_ABS = 0x90 y OP_NEGATE = 0x8f: they are used to invert the sign of the input, that is, to make the input positive or negative respectively.

OP_RIPEMD160 = 0xa6: It is used to encode the input with the RIPEMD-160 algorithm, in order to obtain shorter but equally safe hashes for creating addresses.

OP_SHA1 = 0xa7: it is used to encode the input with the SHA-1 algorithm, which is used to calculate and obtain a single check value for all inputs not greater than 264 - 1 bit.

OP_HASH160 = 0xa9: used to encode the input 2 times. The first encoding through the SHA-256 algorithm and the second with the RIPEMD-160 algorithm

OP_CHECKMULTISIG = 0xae: used to make a comparison between the first signature with each public key until a match is found ECDSA. Then repeat the process with the second signature and subsequent public keys and so on until all the signatures have been verified.

OP_CHECKLOCKTIMEVERIFY = 0xb1: this code marks as No. the entry is valid if the top element of the stack is greater than the field set as nLockTime, which represents the condition that must be met. In the application of this code there are several implications that also make the entry invalid. For example, if the stack is empty or its top element is negative, among others.

OP_CHECKSEQUENCEVERIFY = 0xb2: also used to mark the entry as No. Valid if the blocking time is different or greater than the value of the top element of the stack.

Each of these OP_CODEs performs a well-defined function, and the joint arrangement of these OP_CODEs is what allows Bitcoin to function as it does. However, OP_CODEs are not unique to Bitcoin. Ethereum for example, it also has its own OP_CODE register that allows you to input instructions to your Ethereum Virtual Machine, and from there carry out all the operations of this blockchain. That ranges from the simplest transactions to complex smart contract operations on that platform. The same goes for the rest of cryptocurrencies, which also have their OP_CODES or similar tools for their operation.

Hence the importance of them, not only knowing them but developing them to expand the functionalities of the cryptocurrencies, and the ecosystems they contain.

Do all cryptocurrencies use OP_CODES for their programming?

Yes, all cryptocurrencies make use of OP_CODES or Operation Codes to internally manage the transactions or operations within their system. What really changes is the way it is written, the languages ​​and the scope of said system, since each cryptocurrency and blockchain has its own peculiarities. Thus, for example, Bitcoin and Bitcoin Cash have very similar OP_CODES, but Ethereum and EOS are two different worlds in comparison, since their operation is radically different.

OP_CODES on other blockchain

When we hear that cryptocurrencies have the ability to be programmed, the truth is that we are saying that blockchains and their tokens can be manipulated thanks to OP_CODES. Certainly, the first sounds much easier, but the technical reality is that: the OP_CODES is in all the blockchains and they are the ones that allow us to program the transactions and other functionalities of the same.

But how big and advanced can these OP_CODES be on other blockchain compared to Bitcoin? The answer to this is simple: there are no limits, just the imagination of the developers.

To give us a good and clear example, let's look at Ethereum. In Ethreum we see a blockchain made up of three elements, the token Ether, the concept of Gas or cost of operation, and the Ethereum Virtual Machine. Seen individually they seem to be unrelated, but the truth is that they are intimately integrated, and this integration depends on the relationship created by the OP_CODES within Ethereum.

So every time we make a transaction in Ethereum, what we do is program the operation with OP_CODES. This operation will allow us to manage Ether and the payment of the operation we will do with GAS, but all this programming is read and executed by the Ethereum Virtual Machine. Thus we are clear how these three elements communicate and how OP_CODES play an important role in the operation of the network.

The same can be observed in networks such as Litecoin (which uses an equivalent to Bitcoin Script), Dash, EOS, Bitcoin Cash (It also uses an equivalent although modified Bitcoin Script) and the same can be seen with the rest of the cryptocurrencies. In short, OP_CODES are not only in Bitcoin, they are an essential part of cryptocurrencies and blockchain where you are making life.