EOS is a platform blockchain designed with a very simple objective: to be a blockchain with commercial capacity. This means that it is capable of deploying decentralized applications (DApps), being highly scalable and serving millions of concurrent users.

BUY EOS AT BIT2ME
Do you want to start enjoying the world of cryptocurrencies, ? Then it is time to open your Bit2Me user account. It is very easy to do and, in addition, following this link You will get € 5 totally free on your first purchase at Bit2Me.

The birth of the project

The start of the project is due to the work of Daniel Larimer, best known for creating the platform Bitshares. He is also a co-founder of the Steem blockchain and is currently CTO of EOS. Among other of Larimer's achievements is the creation of the consensus algorithm DPoS (Delegated Proof of Stake Algorithm) and technology Graphene. Another important figure is Brendan Blumer, who is the current CEO of the project.

Larimer announced its first launch at a conference in 2017. Back then, EOS started with an ICO (Initial Coin Offering) launch. The token distribution schedule would be as follows:

The project he turned officially in open source software on June 1, 2018. At that time, it laid the foundation for programmers to exploit the potential of this blockchain. On the other hand, EOS token holders act as shareholders of companies listed on traditional exchanges. In this way, the holders can cast votes and participate in the government of the blockchain, in proportion to their actions.

With these characteristics, it was transformed into a community development monitored by block.one. The reason for this is to allow a more accelerated development of the objectives.

Pillars of its construction

EOS is a project highly focused on solving many of the problems of blockchain technology. Especially those who keep it away from massification and worldwide adoption. To achieve this, it has a series of fundamental pillars to fulfill, they are:

How does EOS work? What is EOS? Daniel Larimer explains it to us

Daniel Larimer, explains the technological evolution that has led to the creation of EOS and its vision of the future of this blockchain.

How does EOS work?

EOS is a blockchain platform designed to enable vertical and horizontal scaling of decentralized applications. Esto is achieved through a construct operating system type upon which they can build applications.

En este sentido, EOS is similar to Ethereum. The capabilities of both to enable the development of distributed applications are immense. However, there are important technical points where EOS has a certain advantage.

Among these points are:

Another important point is that it has a consensus protocol designed for high scalability. In the development of EOS, Delegated Proof of Stake (DPoS). In this way, all those who have EOS tokens will be able to choose to produce blocks thanks to a voting and approval system. The production of currency is permissive. In other words, a user can produce blocks in proportion to the votes he accumulates. The network can produce one block every 0,5 seconds and batches of 126 blocks each time.

DPoS - The Architect of EOS Scalability

The high EOS scalability is possible thanks to the use of a consensus algorithm thought for it. This algorithm is that of Delegated Proof of Stake (DPoS) Proof of Participation. This algorithm is a substantial improvement to the consensus algorithm of Proof of Stake (PoS). This system holds that EOS token holders choose block creators through a continuous approval system. Where each participant in the network can take part in the creation of blocks according to the number of votes they receive.

This scheme of operation enables high scalability on the blockchain where it is implemented. At the same time, remove the mining is. and maintains network security. To get a clearer idea of ​​the level of EOS scalability, the network can currently handle more than 80 million transactions per day. And that is just the beginning.

Thanks to the DPoS consensus protocol, EOS has a very efficient transaction system. Thanks to DPoS, a transaction can be considered confirmed with 99,9% certainty, 0,25 seconds after its issuance.

In addition to DPoS, EOS implements an algorithm of Asynchronous Byzantine Fault Tolerance (aBFT), a kind of Byzantine fault tolerance. The goal of this is to achieve much faster transaction irreversibility. The aBFT algorithm provides 100% confirmation of irreversibility in 1 second.

Another improvement to the transaction system, comes from the algorithm Transaction as Proof of Participation (TaPoS). This algorithm requires that each transaction include part of the hash of a recent block header. Thanks to this design, the falsification of transactions on the blockchain is made difficult.

Accounts - Creating a simple interface for the use of the blockchain

EOS is a platform that enable the ability to use smart contracts like Ethereum. Thanks to this functionality, you are able to deploy distributed applications and services (DApps). The main feature of this characteristic is that does not use a virtual machine for its Smart Contracts. Instead, use a API C / C ++ based programming. As a result of this, smarts contracts are fast and very flexible. A situation that encourages its optimization, high scalability and security. In addition, there is extensive documentation that facilitates the task of programming these smarts contracts. 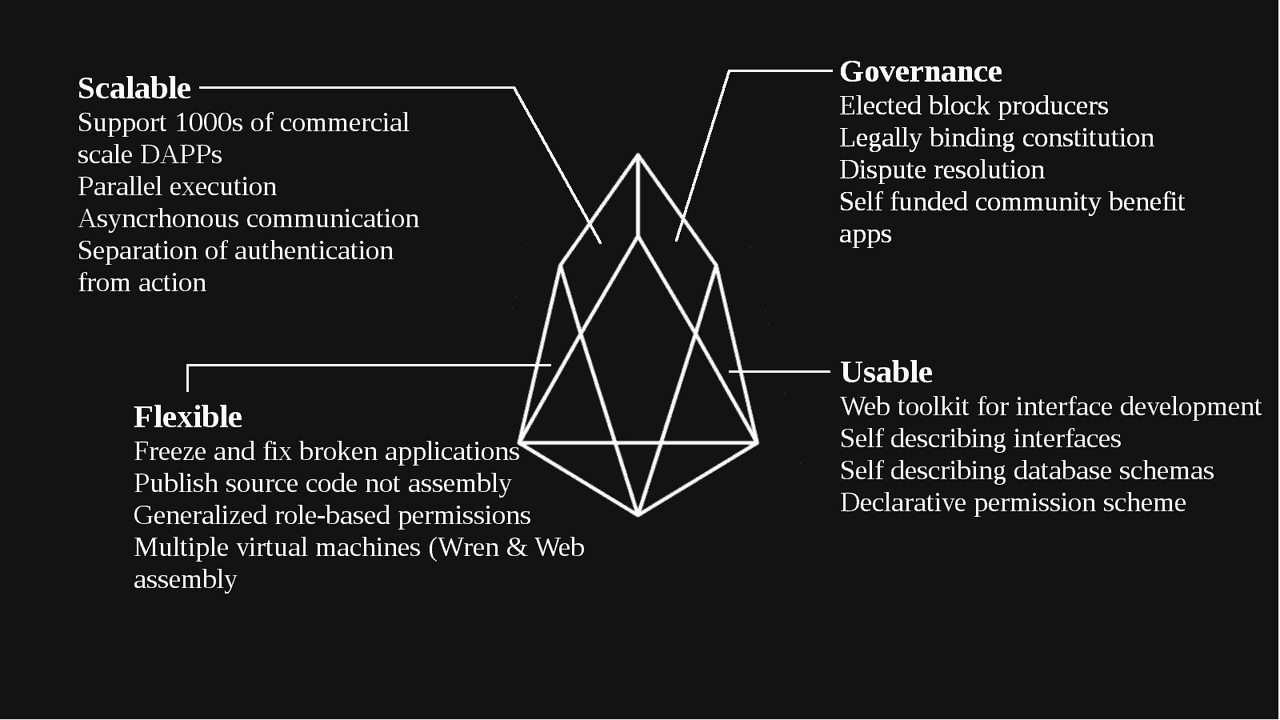 Management and administration of resources in EOS

EOS recognizes the power originated from token holders and that they delegate to block producers. Block producers are given limited and proven authorization to freeze accounts, update faulty applications, and propose forced changes to the underlying protocol.

In addition to this, it is allowed to establish a peer-to-peer terms of service agreement. This contract is what is called "Constitution". The content of the same defines the obligations between the users. In addition, it facilitates conflict resolution by establishing jurisdiction and choosing the law. Each transaction transmitted on the network must incorporate the hash of the constitution as part of the signature. This is done in order to explicitly link the signer to the contract.

BUY EOS AT BIT2ME
Do you want to start enjoying the world of cryptocurrencies? Then it is time to open your Bit2Me user account. It is very easy to do and, in addition, following this link You will get € 5 totally free on your first purchase at Bit2Me.

Go to the EOS white paper

Go to the EOS github

Go to the official EOS thread on Bitcointalk