What is Curve (CRV)?

Curve (CRV) is a decentralized exchange (DEX) and a liquidity pool that allows you to trade with stablecoins or stablecoins quickly and easily.

EThe boom of the DeFi or Decentralized Finance has seen the birth of many platforms that offer new and innovative tools, and one of those platforms is Curve Finance.

But what does Curve Finance really offer that makes it so appealing to users of DeFi? Well, these and other questions will be answered below in this article dedicated to unraveling one of the fastest growing platforms in the DeFi ecosystem.

Curve Finance (CRV) or Curve, is a decentralized exchange (or DEX) dedicated to offering exchanges of stablecoins or stablecoins. In short, it performs operations like the ones uniswap does, only that Curve focuses on assets with parity 1 to 1 with national currencies. This feature has made Curve a favorite of stablecoin traders and liquidity providers looking for minimal slippage to minimize losses. Remember that; slippage refers to the difference between the expected price of a trade and the price at which the trade is executed, and it is a recurring source of losses in certain exchanges.

And not only that, Curve offers a simple interface and some of the smart contracts or smart contracts safest in the entire DeFi ecosystem. This together with a wide support of stablecoins among which we can find DAI,USDC, USDT, TUSD, BUSD, PAX and sUSDas well as pairs BTC (RenBTC, WBTC, sBTC and HBTC), allowing to operate with all of them quickly, in a process without custody and in a decentralized way.

All these features have made Curve one of the most used DeFi platforms today, especially for its ability to offer excellent exchange rates for stablecoins and for allowing the connection of various DeFi platforms using Curve pools.

Curve Finance is a relatively recent project in the DeFi world, in fact its whitepaper was presented on November 10th 2019, by the hand of Michael Egorov.

The platform, which was initially called StableSwap, was intended to provide DeFi services for stablecoins within a coin creator. market autonomous (from the English Autonomous Money Market - AMM) whose main characteristic would be a minimum price slippage, as well as an efficient "fiduciary savings account" for liquidity providers, all managed by smart contracts within Ethereum.

What led Egorov to create this system was to offer a medium of exchange that would serve as a bridge between centralized stablecoins (such as USDT) and decentralized (such as DAI), to make the exchange between them maintain a dynamism that will help the market grow.

This dealt with situations such as those that arose when MakerDAO lowered its stability fee to 5,5%, causing many users of Compound (which had the interest rate of 11% at the time) will stay there because they took the loan in DAI, and the conversion between DAI and USDC is a costly task, leading to stagnation of the markets.

How does Curve work?

The operation of Curve can be understood simply as a decentralized exchange or exchange. But behind that exchange there are some concepts such as liquidity pools, which are what allow you to have the necessary liquidity for your stablecoins exchanges.

Curve Pools, the liquidity spaces of the protocol

At this point, CRV's liquidity pools look a lot like uniswap. In fact, Curve is known as the "Uniswap of stablecoins" because of that.

Now, let's remember that a liquidity pool is simply a space controlled by a smart contract where large amounts of an asset are amassed and injected (or invested) by liquidity providers (LP).

These users inject this liquidity in order to obtain profits from the loans or exchanges that will be made using these assets. Thus, each loan or exchange carried out carries a small fee or interest, which, added together, ends up feeding the profits of the liquidity providers. Well, this is the concept that Curve follows with its pools, only that instead of having highly volatile assets, it prefers stablecoins.

Thus, liquidity providers can inject their DAI or USDT to Curve Pools, which this protocol will then use to offer exchanges with a slight fee that will ultimately feed the liquidity providers' profits. The fact of using stablecoins, makes even each decimal count and, in the end, the profit obtained is important in relation to the time that a certain capital is blocked within the pool.

But, in addition to this, Curve also integrates with other platforms, providing another secondary means of exchange in order to obtain higher profits. This is the reason why we can see liquidity pools in projects such as Yearn Finance, Uniswap or Compound, each one of them thought of taking advantage of the liquidity contained in Curve, using said assets in other protocols.

In short, Curve and its pools are designed not only to act as an exchange, but also to provide liquidity to other protocols. 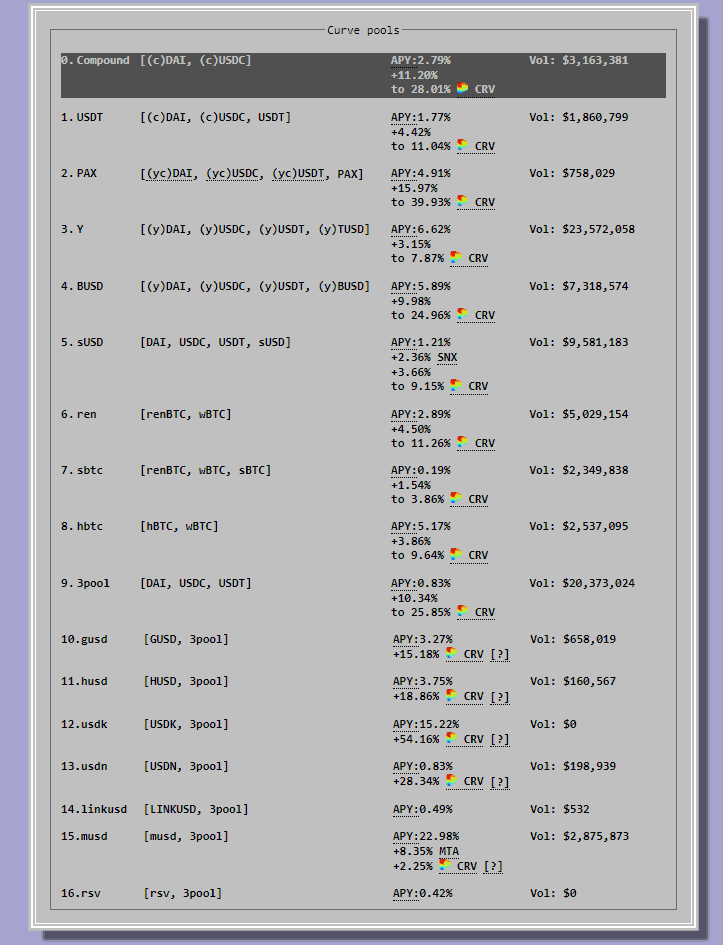 El token CRV, is a token ERC-20 of governance designed to incentivize liquidity providers on the platform, as well as to get as many users as possible involved in the governance of the protocol.

Those three things require voting within the Curve DAO, which is why if a user wishes to vote, they must block their CRV tokens and acquire veCRV tokens.

veCRV stands for escrow vote CRV, it is simply CRV tokens locked for a period of time, the longer you lock your CRV tokens, the more veCRV you will receive.

This is a recently created mechanism, in fact, it was presented on August 13, 2020.

Among the details of the token we can mention:

Like all ERC-20 tokens, this can be stored in any wallet that is capable of offering support for this standard, so that you can store it safely at all times.

Is Curve favored by DeFi and stablecoin users for its low price slippage?

Curve is the favorite DeFi platform for stablecoin users due to its low slippage and good yield performance. farming and liquidity mining, despite the risks involved in these last two practices.

Pros and Cons of Curve

One of the main benefits of Curve is that its currency exchange mechanism is extremely simple. Its smart contract is far from being very complex and this has as its main advantage that its maintenance and security improvement is very high. In fact, it has a very active security problem investigation team.

Another positive point is that it usually offers exchanges for much lower commissions than other platforms. For example, during the last increase in the gas price of Ethereum, a transaction on Curve could average $33, while on Uniswap it could be between $55 and $80.

On the other hand, trading tokens on Curve is quite low risk. The operations consist of a single transaction with a minimal attack surface. Additionally, the risks of impermanent losses are rare to see within Curve, all thanks to the fact that this protocol makes use of stablecoins.

Despite this, one of the cons of Curve is its integration with other platforms with the intention of maximizing your profits. Integration, for example, with Compound puts the assets that Curve has within that platform at risk. In that way, a fault within Compound it would adversely affect Curve and its liquidity providers. While this integration solution solves the problem of low profits, it generates another that may be worse.

On the other hand, the high dependence on highly dynamic and explosive markets makes the platform have a high fluctuation in its returns. High-yield pools attract liquidity over time and often turn into low- or medium-yield pools over time.

Go to the Official Discord

Go to the official Telegram

Go to the official Curve guides