Hashgraph is an interesting consensus protocol and DLT technology that seeks to compete with blockchain technology offering security and high performance, without giving up decentralization.

La New XNUMXrd Generation Distributed Ledger (DLT) Technology, named as Hashgraph, promises to be the evolution of the already known tecnología blockchain, introduced by Bitcoin in 2009.

This new project was publicly released in March 2018, by the professor of Computer Science, Leemon Baird. Although project development really started with the work that Baird started in 2012. Back then, Baird was looking to create a highly scalable and secure distributed consensus algorithm. His work led him to the design of Hashgraph, a highly scalable consensus algorithm whose whitepaper se published in 2016. The name of this whitepaper is "Hashgraph Consensus: Fair, Fast, Byzantine Fault Tolerance", and already made it clear what Baird was aiming for with his creation.

Thanks to this work, the consensus algorithm de Hashgraph It is considered by many analysts as the first technology capable of dealing with blockchain technology. This especially due to its high scalability and the level of security that the system is capable of achieving. So, with the appearance of Hashgraph, a new possibility opens up to the improvement and evolution of this incredible decentralized technology.

But before continuing, first make a clarification: Hashgraph It is the name of the consensus technology we are talking about now. While Hedera Hashgraph it is the company and the circle of private governance that manages this technology. Having clarified this point, we can begin to know a little more about this interesting technology and everything it has to offer us.

The project Hashgraph is based on the development of Similar Distributed Registers or Distributed Accounting technologies, known as DLT. For its operation a asynchronous consensus algorithm based on this distributed accounting technology. The fact that the algorithm is asynchronous means that this algorithm is capable of multitasking with time variations between requests and responses within the system. This seeks to improve performance and improve the current and already known blockchain technology.

An additional point of Hashgraph is that the algorithm seeks to offer a more efficient method of protecting the platform against computer attacks. To do this, Hashgraph makes use of a fast and asynchronous information dissemination system, ensuring that data on the network reaches all nodes faster. Also I know eliminates the need to use mining nodes to validate information. With these two points, it is achieved that transactions can be carried out much more quickly and efficiently, maintaining security and reliability.

To put aside the mining structure, Hashgraph uses a consensus protocol based on virtual voting.  This system in turn is supported by its information transmission system called, Gossip Protocol. In this way, Hashgraph operates much more efficiently than using protocols known as Proof of Work (PoW) o Proof of Stake (PoS). 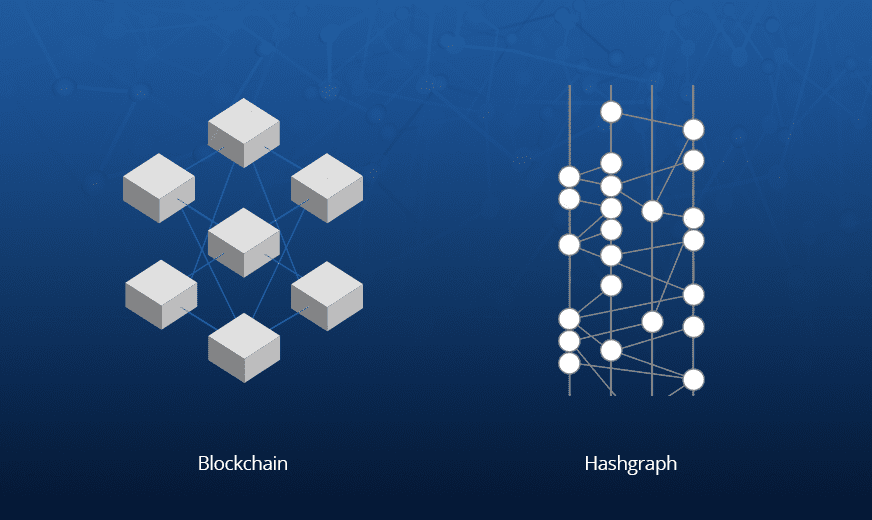 The origin of the Gossip Protocol is related to the epidemic replication algorithms described by Demers Alan, Greene Dan, Hauser Carl, Irish Wes, Larson John, Shenker Scott, Sturgis Howard, Swinehart Danm and Terry Doug in their study. "Epidemic Algorithms for Replicated Database Maintenance" from 1987. This work is vital for the development of these algorithms, not only for Hashgraph but also for other branches of computing.

This protocol allows that, once a certain point has been reached, the information is replicated to all the nodes of the Hashgraph network by means of the gossip protocol about gossip. In this way, all the nodes can validate and process the information, and at the same time, have concrete knowledge of all the details of the operation. With this, the validation process will be much faster and more efficient than that performed by other protocols such as PoW or PoS.

To achieve all this, Gossip Protocol performs computer-computer communication. The objective is simple: disseminate information on transactions made by users quickly and reliably. This is accomplished because each node on the network replicates the message to the same extent that it received it. For example, if an initial message was sent with 100 destinations, each of those destinations will replicate that message to 100 different destinations. The continuation of this chain will mean that in a few transmission operations, the messages have reached all the nodes that make up the network.

The above, together with Hashgraph technology, allows a transaction to be confirmed by most nodes on the network in just a few seconds. At the same time, it allows up to 10.000 transactions per second (TPS), which is a huge improvement in scalability compared to Bitcoin and other cryptocurrencies.

Also, in this protocol, the nodes execute the same consensus algorithm as the other nodes. So they maintain a very secure and cryptographically reliable data structure. In this way, a consensus can be reached on the information processed, keeping a detailed record with the date and time of approval, in addition to a digital signature of the user who generated the operation.

The system presented by Hashgraph has great features and functions compared to blockchain technology. However, all of them are not yet fully polished or implemented, because they are in development. However, among its current and functional characteristics we can mention:

In Hashgraph the Byzantine Failure Asynchronous Tolerance (aBFT), a kind of BFT to guarantee the security of data stored within the network. In order to prevent malicious actors from modifying or manipulating the information for their convenience.

The fact that Hashgraph has this kind of tolerance ensures that no single member (or small group of members) can prevent the community from reaching consensus. It also ensures that consensus cannot be changed once it has been reached. Each member will reach a point where they will know for certain that they have reached a consensus and the process is performed asynchronously making it efficient in terms of speed.

El Gossip consensus protocol Employed by Hashgraph is the secret behind the speed of the network in the processing of data and information. With it, you can process up to 10.000 transactions per second, being validated almost instantly. This protocol has been constructed in such a way that as the network grows in number of nodes, these end up adding effective processing power to the network.

In Hashgraph, nodes are chosen at random and do not require possession of hash power or computation to participate in the validation of information. Further, Hashgraph uses the timestamp, so the order in which transactions are processed and validated is not important.

Hashgraph has managed to combat the main problem that blockchains have presented from the start, scalability. This new asymmetric algorithm technology is much more scalable; while significantly reducing the risk to forks.

Hashgraph supports ACID (Atomicity, Consistency, Insulation, Durability) a term that applies to the database and that ensures the consistency of the data stored in it.

Hashgraph is fundamentally fair because no individual can prevent or delay a transaction. If one (or few) malicious nodes try to prevent a certain transaction from being delivered to the rest of the community and thus add to the consensus, then the random nature of the Gossip protocol will ensure that the transaction flows around that block.

In Hashgraph each transaction has a timestamps consensus that reflects when the majority of the members of the network received that transaction. This consensual timestamp is "fair", because it is not possible for a malicious node to corrupt it and make it differ much from that moment.

For this, each transaction is assigned a consensus time, which is the median of the times in which each member says they received it for the first time. Received here refers to the time that a given node passed the transaction to another node through the Gossip protocol.

Unlike blockchain technology, Hashgraph is not entirely immutable, instead the system has controlled mutability. That is, there is the possibility under certain conditions that the nodes can alter the information contained in the DLT and the result is exposed to a new consensus on the part of the network.

Hashgraph is a protocol completely designed to create multiple tools, and for this it uses the ability to create cryptocurrencies and smart contracts.

Hedera Hashgraph is currently governed by the so-called Hedera Governing Council. This is a board of experts comprised of a total of 39 leading global companies and organizations, spread across up to 18 different industries and spanning a wide range of geographies.

The Board of Directors makes key decisions on software updates, network pricing, cash management, and more. The members of the Board of Directors have a limited mandate and do not receive any benefits from Hedera. This council is structured to best satisfy the desire for decentralized, wise and stable government in the long-term interests of the platform. All members of the governing council have partially taken ownership of Hedera Hashgraph LLC, by signing the agreement.

The purpose of creating this governance body is to prevent Hedera from being governed by unknown groups of miners and developers. They further indicate that this business structure greatly reduces the risk of ideological or personal disputes that have affected the governance of other public DLT platforms. On the other hand, it means that Hedera has a strongly centralized ecosystem where these companies decide the future of technology and who has access to it and under what conditions.

One of the most noticeable differences between these two technologies is, of course, the implementation of a different consensus protocol. In blockchain, the Proof of Work (PoW) is used to generate new blocks within the chain and validate the information. While in Hashgraph the Gossip Protocol is used to disseminate the information of the transactions carried out between the nodes interconnected to the network. The latter does not need to perform complex computational calculations. So it does not demand the consumption of a large amount of energy, and therefore, its process is much cheaper and faster.

Moreover, the way these two technologies work also denotes a big difference. However, nlockchain operates synchronously, where each new event is intimately related to the previous event. Whereas in Hashgraph, processes occur asynchronously, so each event is handled and processed independently of each other.

Likewise, the programming languages ​​where these technologies have been written are also different. Blockchain is written in different programming languages, while Hashgraph uses the Java and Lisp languages. In the same way, ownership over these technologies also differ. While the blockchain that Bitcoin employs is public and accessible to everyone, Hashgraph is mostly privately owned, so its accessibility may be a bit more complex.

Now, one of the similarities between these two technologies is that in both, the network nodes store an exact copy of the recorded data. And once information is processed, it is immutable within the registry.

Lastly, although the benefits that Hashgraph technology offers over blockchain have quite an advantage. However, it is still a technology in development with many incomplete and immature points, so it will be necessary to wait until its full launch to check its operation and characteristics, together with the community.

Go to the HashGraph github

Go to the official Discord

Go to the official Medium

Go to the official telegram channel

What is Bit2Me Academy?

Online educational platform for professional content for the cryptocurrency industry and Blockchain technology. In your language, at your own pace and for free.

🗒 Your opinion interests us!

Do you need help with your first Bitcoin purchase?

We guide you to make your purchase as simple as possible.

Thank you so much!

And now ... make us a proposal for improvement.
We give € 50 to the best proposal.

Any suggestions for Academy as a platform? An item you miss? Don't shut up!