Skip to content
> Cryptocurrencies / Blockchain > What is the Kadena cryptocurrency (KDA)?

What is the Kadena cryptocurrency (KDA)?

The Kadena project is one of the most interesting third-generation blockchains currently in development, based on a blockchain with PoW and Pact.

SIt is based on a patented blockchain technology that uses a Proof of Work (PoW) system and a new programming language known as Pact for the generation of an ecosystem of fast and secure dApps that aims for mass adoption and rapid expansion in the business world. Read on to learn everything you need to know about the Kadena cryptocurrency.

BUY KADENA KDA ON BIT2ME
Do you want to start enjoying the world of cryptocurrencies, ? Then it is time to open your Bit2Me user account. It is very easy to do and, in addition, following this link You will get € 5 totally free on your first purchase at Bit2Me.

The development of this project began to be traced in 2016 when Stuart Popejoy and Will Martino began to design the bases of this project. Both had experience with blockchain projects, as Popejoy had been a head of JPMorgan's Emerging Blockchain and Martino had worked as a technology lead for the SEC's Cryptocurrency Steering Committee. His first iteration of work was what gave rise to JPM Coin, which came to light in 2020, thus creating JPMorgan's first stablecoin and blockchain.

However, after this first experience, Popejoy and Martino wanted to go a step further and take a risk with the creation of a totally new technology. From here is how the development of Kadena begins. In order to have top-level advice for the construction of their project, Popejoy and Martino sought the collaboration of Dr. Stuart Haber, one of the most mentioned authors in the white paper of Bitcoin, and who worked with W Scott Stornetta, in chained timestamping systems, a precursor to blockchain technology designed by Satoshi Nakamoto.

In order to make its development possible, the team began raising funds using a SAFT (Simple Agreement for Future Tokens) private sale scheme, launching an ICO and various types of aid from companies and organizations. In total, the project raised a total of 17,3 million dollars by mid-2019. The tokens acquired by those sales were distributed following the scheme below.

Finally, the launch of mainnet of Kadena took place on November 4, 2019 and since then the Kadena ecosystem has not stopped growing demonstrating the potential of this new blockchain. 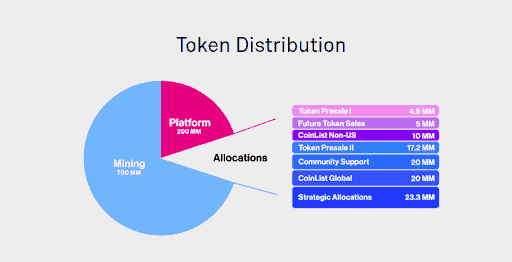 How does Kadena (KDA) work?

Kadena is a project very focused on two points: offering high scalability and a powerful scripting language. smart contracts to make extremely efficient dApps. Both things go hand in hand because the purpose of Kadena is to offer companies and interested parties the opportunity to build dApps with global reach and mass use.

Achieving this requires two basic technologies: the Tendermint consensus protocol and the Pact programming language. Tendermint is known in the blockchain world for being a high-speed consensus protocol. This protocol was developed by Jae Kwon, president of the Interchain Foundation, the same one behind the development of Cosmos (ATOM). Tendermint works thanks to a distributed computing technique known as State Machine Replication, which allows nodes to deterministically replicate the state of a computation in each of its parts.

In other words, a node takes the input data from the network, performs its calculation and obtains a final state that is then shared with the rest of the nodes, being able to verify said state quickly. As a result, Tendermint is able to quickly reach consensus, even if the network consists of hundreds of thousands of connected nodes.

Together with Tendermint, Kadena has developed Pact, a programming language with formal verification that allows the development of smart contracts that can be updated on-chain. Thanks to these characteristics, Pact allows secure smart contracts to be developed. They are safe, not only at the level of instructions, but also due to the fact that any error detected can be quickly fixed. These solutions are achieved with an update of the smart contract, reducing the complexity of security deployments.

Kadena maintains its consensus to an architecture called Chainweb, which relies on Tendermint.  Chainweb is actually a set of multiple blockchains working in parallel and combined to result in the Kadena blockchain. This allows Kadena to offer a unique level of scalability without compromising network security.

In the Chainweb, each of the Proof of Work (PoW) chains is responsible for mining the same coin (KDA) and contains references to the previous blocks of their “homologous” chains. Due to this, they have the capacity and power to validate transactions of others and share liquidity. In this operation, each individual chain has the same capacities as the main chain. Thus, Chainweb achieves the unique goal of streamlining transactions linearly as new parallel chains are added to the mainnet.

As for the miners, they address each chain individually, reducing the typical "bottleneck" that we usually find in currencies such as Bitcoin. In this way they can dedicate themselves to mining in each of the subchains, making sure that all of them can be attended to at all times.

However, the subchain system has a huge challenge: maintaining security. This security is sustained on the basis of a merkle tree which is able to join the states of each of the individual strings and add it to the final string. In this way, Chainweb becomes a blockchain of blockchains.

To understand it more easily you can imagine the strings A, B and C, which are substrings of the main string P1. The miners mine each of the subchains (A, B and C) and work just as they were individual chains. That is, transactions are made, transactions are taken, blocks are mined, sent to the rest of the network, verified, and consensus is reached for each of the subchains. With each of those blocks added, chains A, B and C have a different Merkle tree hash. Likewise, that merkle hash is then linked to the main chain P1 by means of a Merkle tree sum that is called a Merkle Cone. This process is interesting because it guarantees two things:

Currently, Kadena has a total of 19 sub-chains in operation, which we can see live from this link.