What is Polygon (MATIC)?

Polygon (MATIC) is a scalability project that allows decentralized applications to run on a network with lower commissions, higher speed and interoperability with the Ethereum network.

Ehe Matic project (and MATIC symbol), now known as Polygon (but keeping the MATIC symbol), is a project focused on offering scalability solutions to projects blockchain that make life online Ethereum (ETH). Let us remember that Ethereum has not had it easy since 2017 when its scalability problems became clearly evident when having to face a massive use of its network during the boom of the ICO.

But not only that, from the end of 2019 to the present day, Ethereum has almost always been at the limit of its capabilities. A situation that has been driven by the great adoption of platforms such as Decentraland, CryptoKitties (in the section NFT) and the boom of DeFi, where platforms like uniswap, Compound, Balancer, Curves y AAVE have meant a huge transactional weight on the Ethereum network.

In other words, Ethereum is currently very overloaded and, therefore, projects like Polygon (MATIC) open a door to create a solution to this problem without leaving this ecosystem. do you want to know what is it about? Then continue reading with us this interesting article about Polygon.

BUY POLYGON AT BIT2ME
Do you want to start enjoying the world of cryptocurrencies, ? Then it is time to open your Bit2Me user account. It is very easy to do and, in addition, following this link You will get € 5 totally free on your first purchase at Bit2Me.

The beginnings of Polygon (MATIC)

The history of Polygon (MATIC) begins in the year 2018, when Jaynti Kanani, Sandeep Nailwal and Anurag Arjun decided that it was time to tackle the scalability and usability issues within the Ethereum network. At the time, the idea revolved around creating a second layer network (sidechain) that would serve to handle the large transaction load of the Ethereum network.

In his first presentation, Matic (which was the name of the project at the time) sought to achieve all this by uniting the Plasma power and a structure of nodes that would have control of a sidechain. Proof of Stake (PoS) for Matic. In this way, the entire operation of the DApps ported to Matic, it would be on the sidechain, and its effects on the Ethereum network would be transferred in blocks through Plasma. This would allow Matic to offer a large number of transactions that would directly leave behind the scalability problems of Ethereum.

However, making all this a reality required a lot of work and a strong investment of resources. That is why on April 26, 2019, Matic offered a seed investment round in which 209 million MATIC tokens were sold for a value of 161 thousand dollars. Along with this seed round, and on the same day, a round for early adopters and an IEO were also offered. In the early adopters investment round, a total of 171 million MATIC tokens worth $ 444.600 were put up for sale. While the IEO, put up for sale a total of 1.900.000.000 MATIC tokens and an amount of more than 4 million dollars was raised.

Development efforts at this point doubled and by May 2019, the audit of the Smart contract of Matic by the company Nomic Labs. This Nomic audit was added to a previous one carried out by Quanstamp, which was aimed at reviewing the smart contracts of Plasma, which was carried out in March 2019. As a result of the audit process and the initial financing of the project, the Matic project was finally able to come to light on May 19, 2020, the date on which the Matic network launched your first block within your sidechain.

However, later in February 2021, Matic decided to change his name and become Polygon, keeping the name of his token and showing the public a new roadmap to adapt to new technologies such as rollups and Validium, which would improve the experience of its network and that of its users. 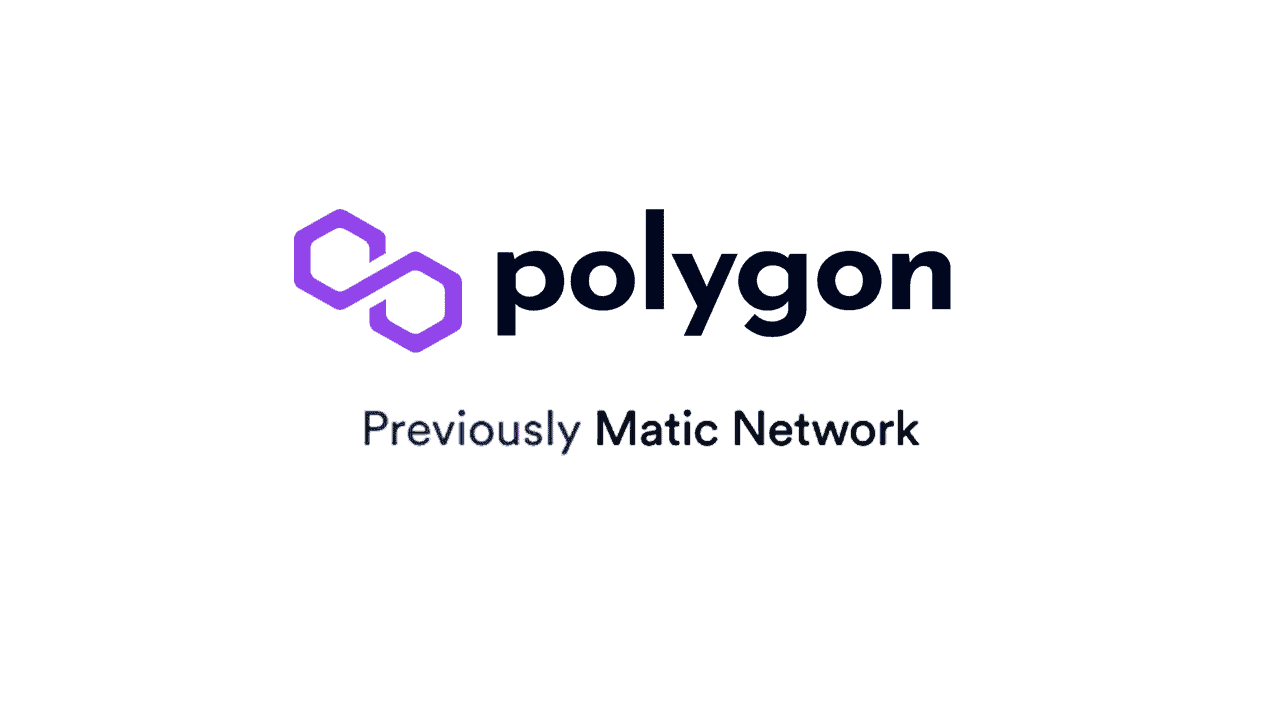 How does Polygon Network work?

As we already mentioned, Polygon works based on creating a network of decentralized nodes that serve to create a sidechain that is connected to the Ethereum network (or to the network that is desired). This sidechain works primarily using the Proof of Stake (PoS) consensus protocol and enables high speed of processing within Polygon. Second, Polygon also makes use of Plasma, a technology equivalent to Lightning Network (LN) which is compatible with Ethereum.

The idea of ​​using PoS and Plasma goes hand in hand with creating two-way communication bridges with Ethereum, allowing Polygon and Ethereum DApps to communicate seamlessly. In this way, an Ethereum user can send value to a DApps on Polygon, or vice versa, without having to worry about incompatibilities between the two networks. Best of all, the way Polygon works allows you to carry out this type of action with any other type of network blockchain, as long as the connection structure between the Polygon sidechain and the target blockchain is created.

However, this creates a problem: the Polygon sidechain can grow exponentially and out of control if it is connected to multiple networks in this way. To avoid this problem, Polygon has implemented an on-chain checkpoint system over its network. The control point system allows a node within the network to only have to store a certain number of blocks, since the blocks prior to this point are already stored in their respective mainchains. With this, Polygon seeks to solve two problems:

Without a doubt, an efficient and secure solution to keep the network running at all times.

Proof of Stake (PoS) is the consensus protocol chosen for the Polygon network, and it is not surprising, since this protocol allows a high speed of block generation and therefore, a higher speed in the confirmation of transactions. These two points are fundamental for Polygon because the idea is to offer a scalability solution that serves millions of people around the world without major problems.

That said, Polygon nodes work thanks to the Staking of MATIC tokens, which are used to choose the validators and block generators within the network. However, the block generation process has a special point of operation. This point is, that each block generated within Polygon, generates a merkle tree that uniquely and unambiguously associates all transactions within that block of the Polygon network. Saying merkle tree, is the only data that is sent as information to the Ethereum network using Plasma, and it would be the fundamental proof that the action carried out in the Polygon network has been correctly registered and is unalterable.

This solution of course also has a point in favor: the transmission of data to the Ethereum network has a negligible cost, compared to the on-chain transaction costs on Ethereum. In comparison, an Ethereum transaction can cost on average about $ 15, while at Matic the transaction has an average cost of $ 0,001.

In the following image, you can clearly see each of the aspects that we have mentioned. You will be able to see how the block producers of the Polygon / Matic network generate the blocks, these blocks are related to a Merkle tree, and from them part the creation of the control points that are then sent to the main Ethereum chain. This entire process is designed to maintain network security and rely not only on the security of Polygon / Matic, but also the enormous computational and security power of the Ethereum network to support the operation of this system. 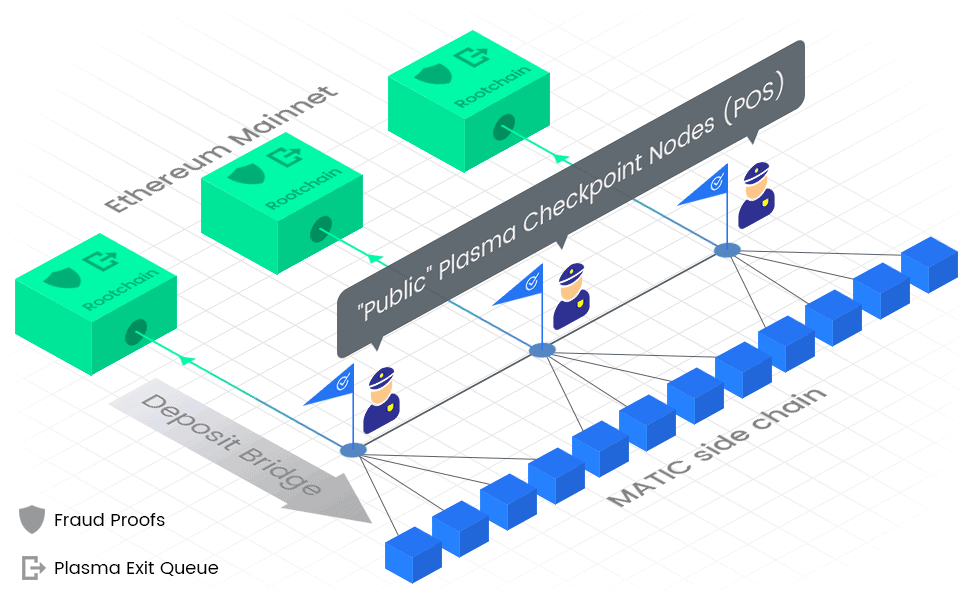 Now, Polygon has evolved a lot since its initial release, and part of that evolution is due to the Polygon SDK. This component is designed so that multiple types of applications can be created and deployed on the Polygon network. Thus, Polygon SDK allows developers to implement Ethereum-compatible chains. What makes it a network with a system of multiple chains that can interoperate with each other

Among the types of chains that can be created we can mention: 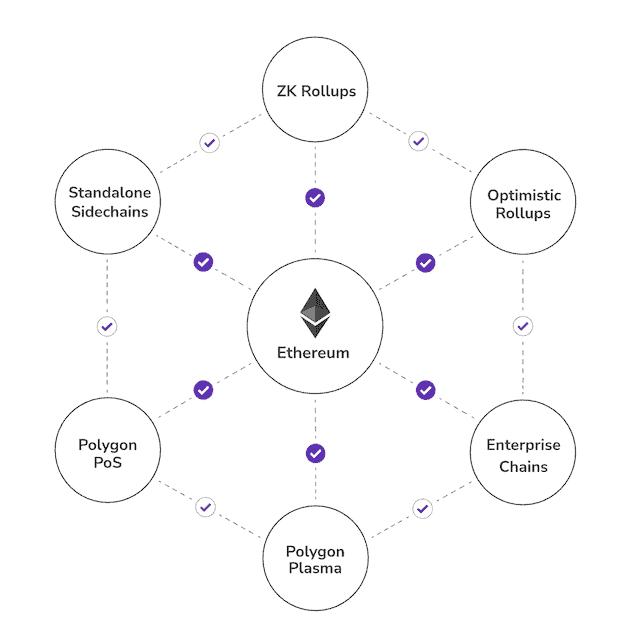 All this without giving up:

In this way, Polygon SDK allows to transform Ethereum into a multi-chain system, similar to the blockchain structure. This system is similar to others like Polkadot, Avalanche or Cosmos, but in a much more integrated way.

The main features of the Polygon are:

The start of the MATIC token begins with an IEO that was conducted on the Binance Launchpad platform on April 24, 2019. This was not a typical sale, however, as instead of being a direct sale, it was conducted in a indirect using a ticket system, just like a lottery. The idea behind this system was to avoid the common situation where a person with a lot of money could buy a lot of tokens. And even impersonating other people, to accumulate more tokens in their favor.

So instead of directly selling the tokens, 16.666 tickets were created that had to be purchased and those tickets gave the winning user the ability to claim their rewards in MATIC tokens at the end of the day. Despite the attractiveness of the system, the sale was a success as more than 4 million dollars were raised

Polygon Network has extensive possibilities and use cases under its belt. The idea of ​​allowing DApps to scale in a real way. And, always counting on the computational power of Ethereum and maintaining compatibility with this network. This certainly encourages many developers to consider the approach of this project.

For example, thanks to Polygon it is possible to connect payment systems, DEX, AMM and other applications very cheaply. DeFi that make life inside Ethereum. In fact, projects like AAVE, Curve, QuickSwap, 1inch, SushiSwap, SportX, Beefy Finance, Pooltogether, bZx, Augur, Ocean Protocol, Clover Finance, and dozens more already use the power of the Polygon Network for their operation.

That is, to payment systems, atomic swaps, DEX, AMM, Liquidity pools, yield farming and flash Loans, who rely on Polygon's ability to run their business as quickly and cost-effectively as possible. A clear sign that Polygon is what it promises, a fast, secure and cheap network to boost your DApps to the next level.

BUY POLYGON AT BIT2ME
Do you want to start enjoying the world of cryptocurrencies? Then it is time to open your Bit2Me user account. It is very easy to do and, in addition, following this link You will get € 5 totally free on your first purchase at Bit2Me.

Go to the official Discord