Skip to content
> Blockchain > What is Proof of Stake (PoS)?

What is Proof of Stake (PoS)?

Proof of Stake (PoS) or Proof of Participation is a consensus protocol created to replace the well-known Proof of Work, providing better security and scalability to the networks that implement it.

La Participation test, is one of the two most widely used consensus protocols in technology blockchain. His name in English is Proof of Stake. From there derive the acronym PoS, with which it is commonly known. The objective of this algorithm, as in PoW, is to create consent between all the parties that make up the network. You can review the differences and similarities between both protocols in this PoW vs PoS comparison.

At nodes. that mine in PoS are called validators. The decision on which node to validate a block It is done randomly but giving greater probability to those who meet a series of criteria. Among these criteria we can mention the amount of reserved currency and the time of participation in the network, but others can be defined. Once established, the process of selecting nodes begins at random. Once the selection process is finished, the chosen nodes will be able to validate transactions or create new blocks.

This reveals that Proof of Stake is a completely different process from the well-known Proof of Work (PoW) protocol. Where each of its nodes does hard computational work to solve cryptographic puzzles. This means that PoW, unlike PoS, requires large amounts of energy and specialized equipment to perform its operations. In PoS, by contrast, this is not necessary. In PoS the process is much simpler and energy friendly. It is these reasons why many blockchain projects are currently interested in this new protocol.

Why was the Proof of Participation created?

The Proof of Stake protocol was created by the renowned developer Sunny king, in 2011. In 2012 King formally presented the whitepaper de the ppco, where it was clear how the PoS algorithm worked. The objective was to solve some known PoW protocol problems. Among them the following stand out:

How does the Proof of Participation work?

The operation of the Proof of Participation protocol is quite particular. This system seeks incentivize participants to have a certain amount of coins at all times. The possession of coins allows them to be chosen by the random selection process that is carried out to designate tasks. Under this scheme, those who have more reserves have greater weight in the network and greater opportunities to be elected. Once chosen they can validate transactions and create new blocks within the network. Allowing them to receive earnings and incentives for the work done.

A simpler way to explain this process would be the following example: 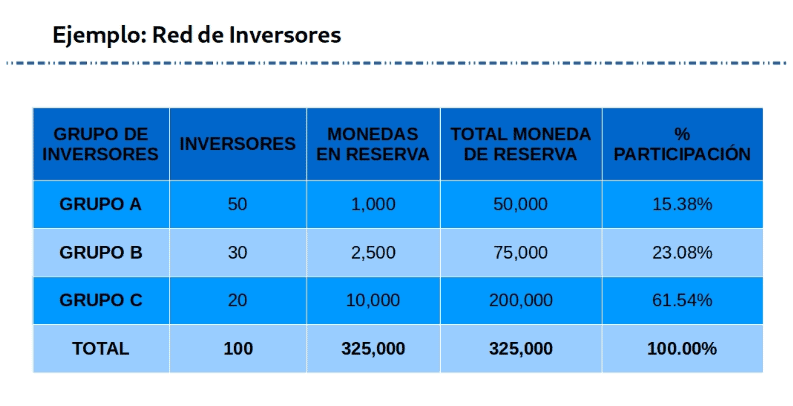 Thus, it is clearly seen that the Group C, He is the one who has the largest participation in the network A total of 61,54% and 200.000 coins to be exact. Now, it is time to carry out the process of random selection in the network. This means that those who are in Group C are more likely to be selected. But not only they are selected. Members of the Groups A y B. This is done in order to democratize and decentralize the network.

Greater tenure does not guarantee selection as a node, but it does provide greater opportunities. With this, it is sought that all those who are within the network benefit without suffering detriments. Additionally, any of the investors in Groups A and B, can invest more to increase their level of participation. Once selected, investors have the ability to perform the tasks that are allowed. Investors perform these tasks in order to receive incentives and earnings proportional to their participation in the system. After the round, the selection process is restarted so that other investors can participate.

In addition to this, funds used as holdings cannot be used and must be locked within the blockchain. This ensures that the funds will always be available as a guarantee from the validating node. However, the node can add new funds at any time, in order to further increase its level of participation.

Is the Proof of Stake economic system unfair to its participants?

Many dismiss the PoS economic system as "unfair" and many apply the phrase "PoS makes the rich richer." However, this is wrong. PoS allows those who participate in your system to maintain their portion of wealth as the network increases in number. This breaks with this phrase and makes it clear that PoS is a fairly fair system regarding the distribution of wealth within the network.

The Proof of Stake (PoS) protocol has a wide variety and powerful features, among which we can mention: