Skip to content
> Mining > What is the CryptoNight mining algorithm?

What is the CryptoNight mining algorithm?

One of the best known mining algorithms is CryptoNight . This mining algorithm is part of the well-known consensus protocol CryptoNote . CryptoNight uses the mining scheme of Proof of Work (PoW) for its operation, and seeks to offer a high dependence on CPU , resisting ASIC, FPGA y GPU.

Its main feature is that it is an algorithm of hash very fast. It also allows good scalability and performs a series of cryptographic tests that are extremely dependent on the cache of the CPU processors. But not only that, its core or cryptographic core works around the AES encryption algorithm, a very secure algorithm and even considered, in some versions, as military-level encryption.

All this makes CryptoNight a mining algorithm very focused on security and that has been its main vehicle for success in the world. cripto. In fact, the fact that the cryptocurrency Monero chose it as the hash algorithm for the consensus proof of work of its blockchain, enhanced the visibility of CryptoNight and opened a space for it in the crypto world.

Now, what is the story behind CryptoNight? doHow does it work this interesting algorithm? As always you can get the answers to these and other questions below.

Origin of the CryptoNight algorithm

But far from the field of speculation, CryptoNote is a reality. The launch of this protocol on such a striking date (to be precise, 12/12/12) caught the attention of the crypto community. This is because CryptoNote featured advanced features that promised things like confidential transactions. In addition to non-linkable transactions, ring signatures, smaller transactions, and enhanced security.

Later in March 2013, the CryptoNight full specification, the mining algorithm that would make CryptoNote a reality. Behind this development are the developers Seigen, Max Jameson, Tuomo Nieminen, Neocortex and Antonio M. Juarez.

The CryptoNote project and its mining algorithm was initially taken over by Bytecoin (BCN) who applied it to their blockchain. But it was not until the creation of Monero (XMR) that this project began to be widely known in the crypto world. 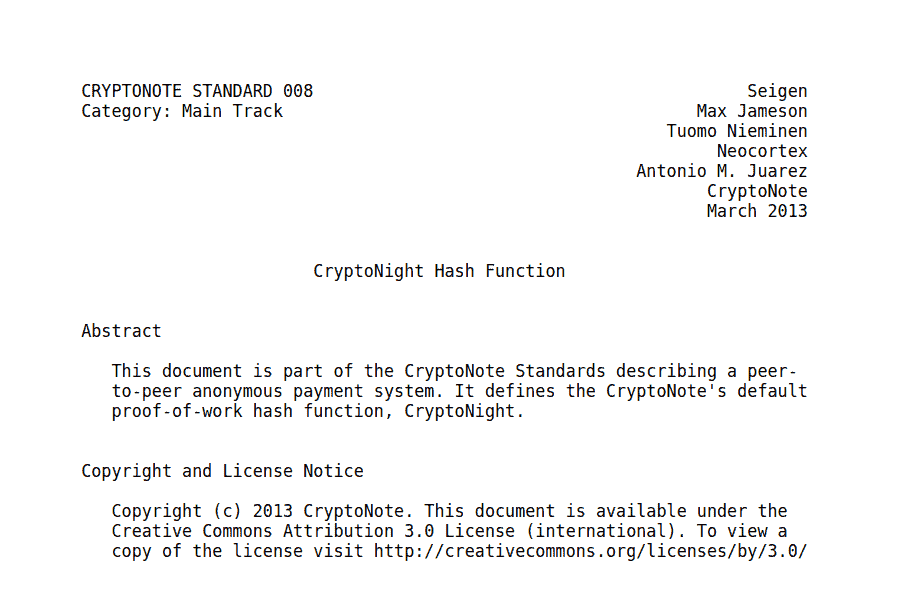 CryptoNight works based on a series of properties that make it very friendly for GPU mining. These properties are:

If we look at these four pillars, we will see that they are all very CPU focused. In fact, some of those functions are much more efficient on a CPU than on any other computational structure, including ASICs. This is what allows CryptoNight to be resistant to them.

But of course, this is just the pillars and not the way the algorithm works, we'll explain that below.

CryptoNight work begins with initializing your workspace. For this CryptoNight makes use of a series of cryptographic primitives that are:

The most important part of the process is the creation of the AES key. This is possible during the first round of operation of the hash functions. First of all, CryptoNight takes an input and feeds it to the Keccak function. To do this, prepare a Keccak-1600 function that is 1600 bits wide. Compared, Bitcoin and its SHA-256 hash function uses 256-bit words or 64 characters. While Keccak-1600 produces much larger hashes, 1600 bits or 400 characters in full, with a size of 200 bytes.

It then takes the first 31 bytes of this Keccak-1600 hash, and transforms them into the encryption key for an AES-256 algorithm, the highest value within the AES family. For this, this small piece of data is encrypted in ten rounds. The rest of the hash is encrypted using AES-256 and is also subjected to a round of 10 encryption cycles.

Now the data collected by these actions feed the core or core of hash functions. As we said the main one is Keccak, which is joined by BLAKE-256, Groestl-256, JH-256 and Hank-256.

What CryptoNight does is take the entire dataset created by the AES-256 and Keccak functions in the previous step, and pass it through the rest of the hash functions. At the end you get a final hash, which is the result of CryptoNight proof of work. This hash has a 256 bit extension or a total of 64 characters.

Pros and cons of the algorithm

Does abandoning CryptoNight development mean it is no longer a secure algorithm?

The abandonment of CryptoNight in favor of RandomX by Monero (the main development community), will gradually make CryptoNight an unsafe algorithm. If any vulnerability or failure is discovered, it may not be corrected and instead, some projects that make use of CryptoNight will surely make the leap from other more secure and active maintenance protocols.

CryptoNight is one of the few cryptographic algorithms that has undergone large amounts of modifications throughout its history. Since the appearance of version 1, demonstrated in its whitepaper, until the creation of CryptoNight-R, the latest version of CryptoNight developed by Monero.

Despite this, the changes and new versions of CryptoNight are aimed at preventing ASIC mining from ruining the algorithm's effort to offer resistance. But each new change in structure to that end adds more complexity and more failure points. This was the main reason why its development stopped (at least from Monero, its most important member in the community).

So for the moment we can say that CryptoNight is an algorithm that has reached the peak of its evolution to prevent ASICs from exploiting this algorithm openly.

Blockchains that use the algorithm

Another blockchain that CryptoNight uses is Electroneum (ETN), which is designed so that mobile devices can serve as full nodes and mining nodes.