Skip to content
> Cryptocurrencies > What is the wETH token?

What is the wETH token?

wETH is a special kind of token ERC-20 whose purpose is to facilitate different exchange operations between the different decentralized platforms that are part of the vast ecosystem Ethereum.

Lto word wETH comes from "Wrapped Ether", what in Spanish means "ETH wrapped". The wETH is an ERC-20 token whose main purpose is to facilitate ether exchange for other tokens ERC-20. Without a doubt, one more twist in the current evolution towards the tokenomics, or put another way, the Internet of money.

At this point you will surely be asking Why can't I exchange Ethers for other ERC-20 tokens directly?. Well, this is because ETH is not compatible with the standard ERC-20 from Ethereum. This is because ERC-20 was defined long after the existence of ETH. Due to this situation, ETH could not be traded directly on platforms DEX by other ERC-20 tokens. To achieve this, a transforming Ether into an ERC-20 token, and is precisely what wETH does.

But this is not the only advantage and functionality of wETH. That is why the following article will explain in a simple way the curious properties and advantages of wETH tokens.

Why do wETH tokens exist?

As we mentioned at the beginning of this article, wETH tokens have been created for a rather specific purpose. However, to fully understand the reason for its existence, it is better to imagine the following case.

Imagine that you own a certain amount of fiat money and are visiting an amusement park. The park has as a rule that everything within it can only be accessed through special tokens that are sold at the entrance. That way, even if you have a lot of money, you cannot use or enjoy anything in the park without these chips. A situation that forces you to exchange your money for chips. All in order to enjoy the attractions and services of the park.

This is certainly quite an annoying and unwanted situation. But the truth is, that in Ethereum precisely this happens. You can have a lot of Ether in your wallet, but if you want to access any service that is paid for in an ERC-20 token, you will have to transform that Ether first. Only after transforming your balance into the token you need can you access that service.

The situation is further complicated when we have thousands of tokens that are traded and exchanged. A situation that makes marketing difficult and presents obstacles to users and their experience.

To get around this the wETH was created. This token actually works as a "converter" between Ethers and tokens. All this thanks to a Smart contract which facilitates this task. After this process, wETH transforms any Ether you send into a 1: 1 ratio. Simply put wETH is a stablecoin from Ether, which can then be converted to any other ERC-20 token you want in a DEX.

Smarts contracts, DApps and wETH, the triad of the Ethereum ecosystem

Given the breadth and complexity of the Ethereum ecosystem, developers have had to create tools that facilitate its use. First, the smarts contracts, are small programs that allow you to develop any type of application that works on Ethereum. In addition the smart contracts they are responsible for the huge ecosystem of ERC-20 tokens that exists on Ethereum. All this because an ERC-20 token is nothing more than a smart contract that has the necessary properties to be classified as said standard.

DApps, on the other hand, are merely the result of interaction of a web or local application with a smart contracts. This ability to interact with smart contracts can be seen for example in Dappradar. This is possible, because if a smart contract is programmed to receive ETH or ERC-20 tokens, it will do so and give you access to the service or function it handles. In this point, Dappradar which is a DApp will allow you to act as a bridge to interact directly with that smart contract.

However, there are cases where a much more direct interaction tool is needed. If for example, we are using an ERC-20 token exchange house, everything we manage is linked to a smart contract. This is where wETH and its 1: 1 parity with Ether comes in handy. As wETH is an ERC-20 token and has an associated smart contract, it is easier, less expensive and safer to exchange wETH for other tokens, than to do it directly from Ether. This is the main reason why wETH has been created.

As you read the above, you have surely asked yourself this question: Why can't I directly exchange Ethers and tokens? This is completely valid and the answer is simple: Ether is incompatible with ERC-20 tokens.

Incredible, isn't it? Hard to believe that Ethereum's base token is incompatible with tokens that run on top of it. blockchain. But in fact, the developers of Ethereum have done it on purpose. His goal was to keep the base of the Ethereum blockchain as little altered as possible.

When the ERC-20 token was designed by Fabian birdcage, the global vision of the ecosystem was more focused on providing economic tools to future DApps. At that point, future possibilities were a little less explosive than they actually turned out to be. The output of the ERC-20 token changed everything. The appearance of DApps, the massification of smart contracts and the appearance of the first DEX, took the design of those tokens to the limit.

Among those limits is the inability to directly trade Ether for such tokens or vice versa. This was never taken into account, because the procedure to obtain these tokens was to send Ether to a smart contract. This smart contract was the one that did the conversion, but there were flaws. For example, Sending ERC-20 tokens to an ETH-managed smart contract will cause you to lose your tokens.

To deal with this failure, without altering the operation of the blockchain, the wETH was created. A special type of token that allows to transform Ether into a wETH token. From there you can trade with other tokens and then transform it back into Ether. It was the necessary tool to facilitate the tasks of trading among the vast number of tokens in the Ethereum ecosystem.

Is wETH the ultimate exchange solution for Ethereum decentralized platforms?

wETH is a good tool for such exchanges but it is not the definitive solution. To do this, Ethereum developers are creating a new type of token, the ERC-223 that will serve to standardize these actions.

Now that you know what they are and the reason why the wETH tokens have been created, it's time to know their usefulness. Among these utilities we can mention:

When you transform your Ether into wETH, you do it in order to keep some funds available in a token that you can use to quickly exchange for other tokens within a DEX. Normally when you only have Ether, it is in your wallet. If you want to buy a token in a decentralized exchange, you must first transform said Ether into a token and from there participate in the commercialization of the token you want. This process adds more complexity to the process. By transforming your Ether into wETH, you ensure that your trader it will be much simpler and safer.

This is because wETH is an ERC-20 token and as such it can be exchanged directly for other ERC-20 tokens. All this without the danger of the transaction making an error leading to the loss of tokens. 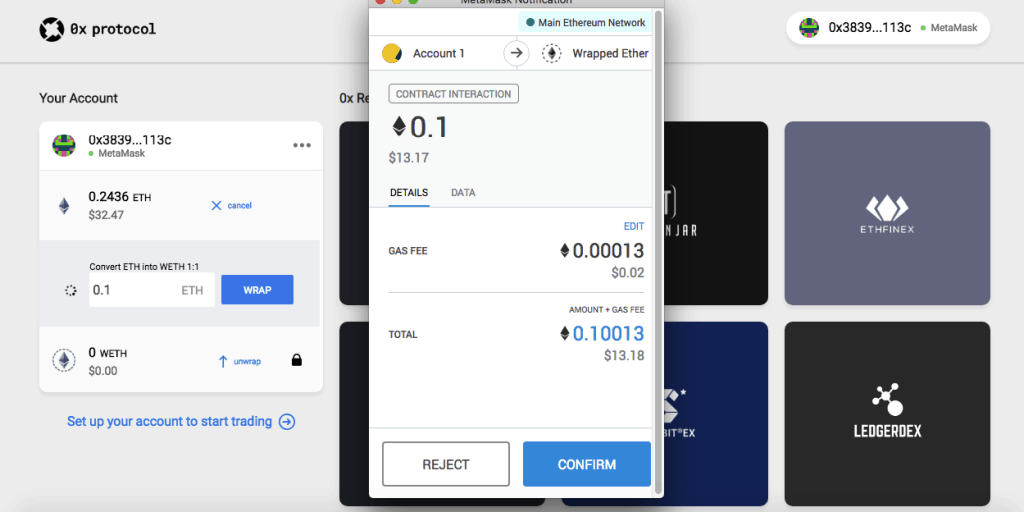 Reduce gas costs within the blockchain

Because wETH is an ERC-20 token based on a smart contract, it facilitates the interoperability of DApps and DEX from Ethereum. By targeting the wETH smart contract, they can enable real-time exchange operations with each other without intermediaries. A situation that further drives decentralized platforms and keeps all power in the hands of users.